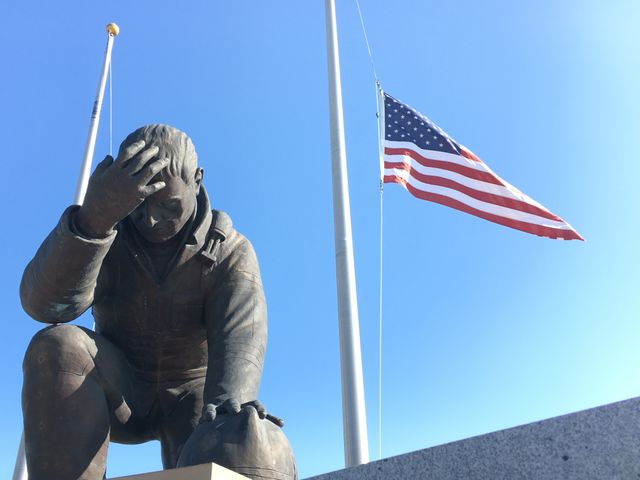 KINGDOM CITY – The Sept. 11 terror attacks stopped everything its tracks, including a Missouri monument that never quite made it to its final destination.

The Fire Fighters Memorial of Missouri’s Fire Fighter in Prayer statue is not the first of its kind. The original made its way to New York City after being constructed in Italy. The kneeling firefighter statue was set to arrive in November via ocean-liner. Instead, the statue was shipped via airliner and arrived in New York earlier than expected on Sept. 9, 2001.

The terror attacks on 9/11 stopped the statue’s delivery to Missouri. Dr. Ron Baker, treasurer on the Fire Fighter’s Memorial Foundation of Missouri Board, said the statue never quite made it to its final destination, because it was already home.

“Instead of shipping it to Missouri, the firefighters in Missouri, as well as the factory in Italy, said let’s leave it in New York as a tribute to the 343 firefighters that died in that tragic event,” Baker said. “So that statue is now on permanent display just a few blocks from ground zero.”

A new replica was dedicated in Kingdom City on May 18, 2002. The memorial features the names of all Missouri firefighters who have lost their lives in the line of duty.

Kingdom City hopes to add an additional museum adjacent to the memorial, but plans have been halted due to a lack of funding. Baker noted the board has obtained about two-thirds of the funds needed to build the museum.

Until then, the memorial still stands, and Baker said he hopes that more people will experience all that the memorial has to offer.

“There is a lot more than just a statue,” Baker said. “It is a way of paying tribute and honor to those men and women who served [in the past] 100 years or more in Missouri.”

To donate to the Fire Fighters Memorial Association of Missouri, visit the website by clicking here.