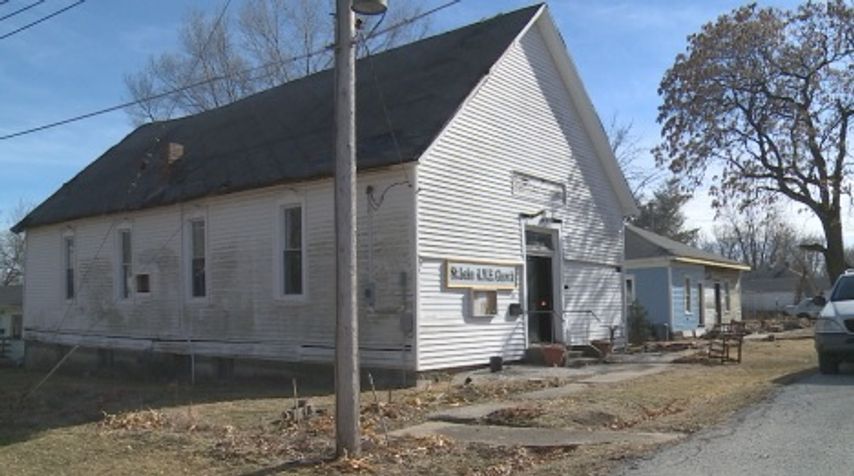 SALISBURY - Two homeowners are trying to preserve a historic Black church and the parsonage next door - and they've lived in both.

Anthony Jessie and Brandon Amos moved from Arizona to Missouri and bought the church, founded in 1868, along with what used to be the pastor’s home.

They bought the property for around $1,200 - a bargain for a history lover and vintage item collector like Jessie. Although the property came at a cheap price, the property also came with its own challenges. According to church ledgers, the house was last rented in 1976.

“It was a jaw dropper coming into the house,” Jessie said. “There was hay in the living room. There was vines growing from the other room ceiling hanging down.”

The home was not livable when they first moved in, so they decided to live in the church next-door while they fixed up the old parsonage. They spent sleepless nights in a tent inside the St. Luke A.M.E Church while their forever home was under renovation.

“The church, though, is really on its last legs,” Jessie said. "It looks like possibly it was fire bombed in the early 50s and so the entire roof of the church is charred out and burnt.”

Rather than letting the church be torn down, Jessie and Amos have decided to fix it from the ground up. Jessie said they are going to try to save the church as long as it's still standing.

“We want everything original,” he said. “We want it to look like it hasn't been touched by time.”

Jessie said the two are also trying to get the church registered as a historic landmark.

“The African American section pretty much built this town,” he said. “It’s just sad to see that fade away with the families passing away. It should be preserved whether the town likes it or not.”

They hope the church will someday be used as a place for weddings or serve as a tourist attraction in the town.

“I guess it’s in my blood,” Jessie said. “I've had a fascination with history and old objects and antiques since I was born.”

A former pastor of the church visited the area this month after being away for years. She served there from 1997-2002. She said she's happy with Jessie's willingness to rebuild the church.

"He began posting things to Facebook and I was really impressed that he had that type of passion for something that many of us didn't know the history," Eraina Ross-Aseme said.

She's hoping the church "can be revamped to the point of being able to enjoy another piece of history."

"I'm praying that a door of opportunity can open up for this historical site," she said.

Ross-Aseme said her time spent as a pastor at St. Luke A.M.E Church was a great milestone in her ministry.

"I'm glad to have come through this town and the experiences helped me to be who I am so, I thank God for the opportunity,” she said.

To keep up to date with the renovation process of the church and parsonage, visit the churches’ Facebook page or if you would like to donate money to help with renovations, visit their GoFundMe page.