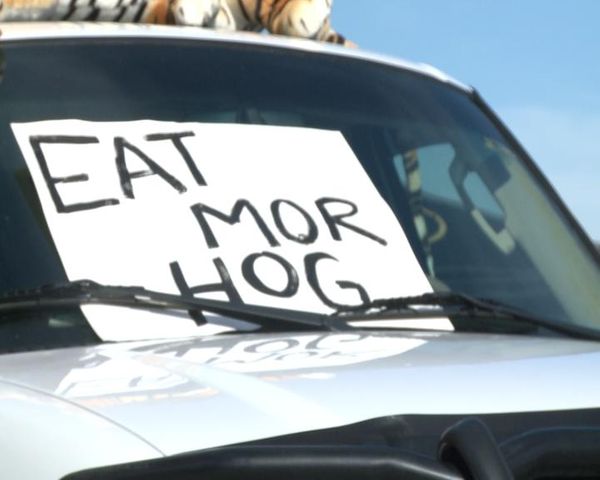 Fans ditched holiday shopping and decked out in black during the Black Friday game.

"We obviously had to cook some razorback," Tailgater and MU fan Brian Nobis said.

Nobis cooked up a spread of just about every pork dish one might consider bringing to a tailgate. He served his clan of Tigers and Razorbacks pork loin, pork quesadillas, bacon-wrapped pork, brisket, pork chops, brisket sliders and to top it off brisket potato chips.

"We literally bleed black and gold," Nobis said. "We love the Tigers. We love Tiger football."

Although black and yellow covered their Lot M spot, the family is a divided one.

"I'm originally from Missouri, but my husband graduated from the U of A. Now we're huge hog fans," Nobis' cousin Emily Stackhouse said.

The two made a friendly, family wager: a $20 check that may or may not ever be cashed.

"This is the best tailgate food, not tailgate, in America," the Razorback fan said.

The teams dubbed the new matchup the "Battle Line Rivalry." But many fans who attended Friday's game said they're not ready to call it that just yet. The matchup was the first regular season game between Mizzou and Arkansas since 1963.

Nobis said real rivalries take time and Mizzou and Arkansas' likely will get there. In the mean time, he's focused on the rivalry at home.