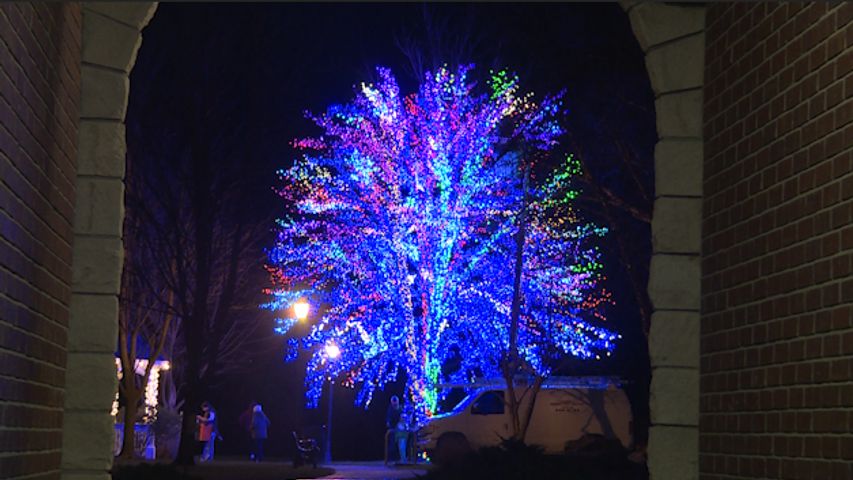 COLUMBIA - As the colder temperatures arrive in mid-Missouri, Will Treelighter has already been thinking about his next design. He’s a house painter by day and Magic Tree maker by night.

For the past 24 years, Treelighter has spent hours upon hours wrapping holiday lights around trees in the state.

He was inspired after seeing trees in parks around town, but they didn’t quite satisfy him.

“They just wrapped things as far as they could reach and stopped,” Treelighter said. “Why not go all the way out to the end of the branches? It would look so cool.”

Treelighter wanted to see the wonderful lights right from his front door, so he started creating a crab apple tree in front of his home in 1995.

“It was just a thing I wanted to see,” Treelighter said.

He started out small.

“I just did some lights on the main branches and then turned around and worked the lights back until I ran out of the strand,” Treelighter said. “It was just fingers of light going out from the main trunk of the tree.”

Ever since he has been creating the Magic Tree in Columbia. This wasn’t a name he came up with himself.

“I got this one, very wonderful letter from this family who said they came out every night because the kids loved it so much, and they came to see the Magic Tree,” Treelighter said. “That seemed like a really good name for it.”

The Magic Tree moved from outside his own home to the Cherry Hill neighborhood in Columbia. Although the location has changed over the years, Treelighter has created a tradition in mid-Missouri.

“People gave it rave reviews, so that encouraged me to keep doing it,” Treelighter said.

All his effort isn’t just for the attraction and spectacle of a tall tree bundled with multi-colored lights. Treelighter’s goal isn’t to help people get into the holiday spirit.

The Plan and Design:

Treelighter starts thinking about the Magic Tree during the summer.

“I throw away the ones that aren’t working because it’s more trouble than it’s worth to fix them,” Treelighter said.

“But because I have so many from the past, it’s not a big outlay every year. It’s a few thousand dollars.”

He has specific tactics in order to make his trees truly magical.

“I look for interesting shaped bulbs. The wider the variety of lights there are the more interesting and magical the tree becomes. I like to do a different color scheme each year,” Treelighter said. “You just need a lot of lights for that.”

Getting the correct design was key for him.

“I’ll do a truck in red, one in yellow and one in green. They are nice traditional holiday or Christmas colors,” Treelighter said. “It changes as I go. I start with some idea of what I’m doing, but it typically changes as I take a step back and take a look.”

This year’s Tree at Cherry Hill presented a new challenge for the design aspect of the project.

“This is definitely the biggest tree I’ve ever done, and it’s probably the last time I do a tree this big,” he said.

Treelighter said he will keep up this holiday tradition for as long as he can.

"It feels good to be doing something that people come and are attracted to and enjoy,” he said.