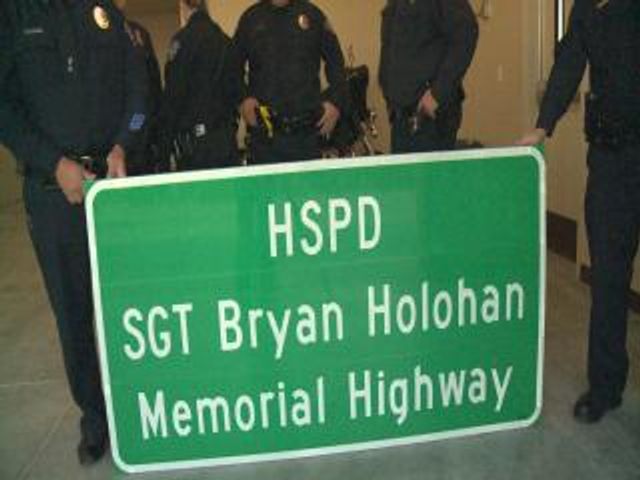 HOLTS SUMMIT - Holts Summit Police Department, family and friends said their final goodbyes while also honoring the life and service of a Sergeant who fell victim to the cancer.

Sergeant Bryan Holohan battled with Hodgekins lymphoma on and off for about 10 years. After his death in 2010 his family wanted to honor his service in the Holts Summit Police Department, and filed a petition to dedicate a a memorial highway in his name.
After about a year of raising funds and donations, Anne Claypool , Holohan's mother was able to get backing from representative Jeanie Riddle and make the the memorial happen .
" It wasn't really important to do it for him it was more for his family, they worked really hard at getting the petition signed rep riddle sponsored it. "

"They did most of the work they made it happen."

Holohan mother Anne Clay pool said she wanted the public to know about her son and the service he gave to Holts Summit.

The ceremony began around 5:45 p.m. Monday evening at Holts Summit Police department with the star spangled banner. As about 25 friends, family members, and colleagues of sergeant Holohan stood with their hands held a tightly across their chest, the air was heavy with honor and pride.

The Holts Summit police chief then began speaking about love the Sergeant Holohan had for his job and how even when Holohan was no longer able to actively serve on the force he was still dedicated to work he did within the Holts summit police station.

Colleagues described Holohan as a jokester and a man that would always rise to a challenge.

"Well he was one that didn't take credit for things. So if he was here, he would probably be hiding in the shadows somewhere," said McIntyre.

The ceremony concluded with a moment of silence and an invitation to share remembrances
"He was a great man and I miss him everyday," said Chief McIntyre.