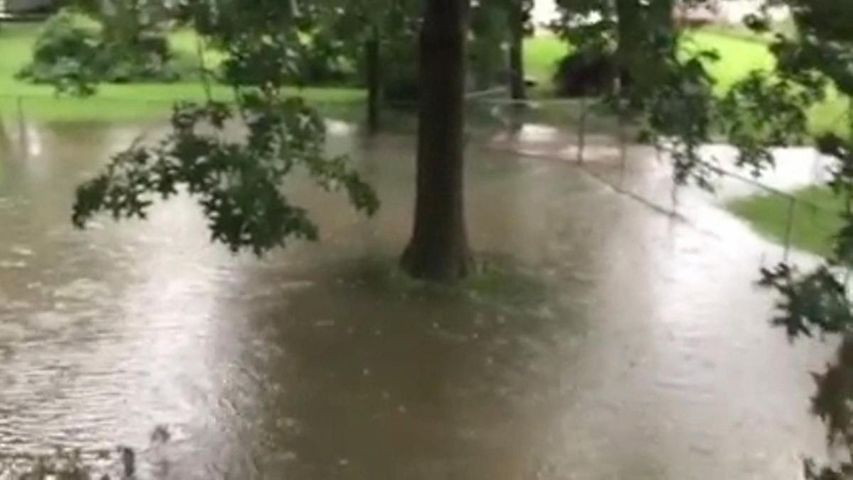 COLUMBIA - Some homeowners along Again Street want to speak at Monday's city council meeting. The residents say the old, outdated storm water drains are not draining rainwater properly, and causing their yards and homes to flood. In addition, this excess rainwater causes the sanitary sewer pipes to overload, and leak sewage into the yard.

Karie Watson, who lives in the neighborhood, said the flooding poses a health concern to more than just the homeowners.

"There's a fitness trail right next to the creek, it's highly used," Watson said. "People walk their dogs, they pick up after their dogs, there's all these little workout benches along the way, and it's right there."

A neighbor said she had the floodwater tested by an engineering firm and it had an E. coli count higher than 3,000, more than 23 times higher than what is considered "safe."

Watson said the problem has been going on for a while. One neighbor said they reached out last year to her city council representative, Ginny Chadwick, for help, but no action was taken.

After their houses flooded twice this summer, the residents decided to reach out to city government again.

Steven Sapp, of Columbia Public Works, said there are two problems. He admitted the storm water drains are outdated, and in need of repair. He also said the sewage lines were installed too close to the houses, and are leaking because they are overloaded.

He said, though it is the city's responsibility to repair the storm drain, residents might be contributing to the sewage leaks.

Sapp said, as a result of the rainwater flooding, some homeowners have started using sump pumps to pull the water out of their basement, which can be counterproductive.

"It's just a case of people not understanding," Sapp said. "You've got a basement that's flooded, and the logical thing to think is 'let's just put a pump in there.'"

But, he said, people can make their circumstances a lot worse if they do not pump that water to the right place.

Sapp said people often empty their sump pumps into their sanitary sewage line. However, he said, sanitary sewage pipes are not designed to handle that much water, and they end up bursting.

"It's a very common mistake," Sapp said. "I've even tried to do that before in my own house."

Watson said she feels the city is underplaying the seriousness of the problem.

"I want the city to meet me in the rainstorm," Watson said. "It's 'Water 101.' It's pretty apparent, if you stand there in the middle of a rainstorm, what needs to be done."

Sapp said he is sorry for the homeowners' trouble, but the city can only work so fast.

"Every city has the problem of aging infrastructure, every community is going through this" Sapp said. "Columbia is no different. We have a lot of different types of these situations going on. We're trying to prioritize, and systematically correct these issues."

Sapp said the city's first priority is to move the sewer line away from the houses. He said public works can then repair any damaged pipes. However, the project could take between 12-18 months to complete.