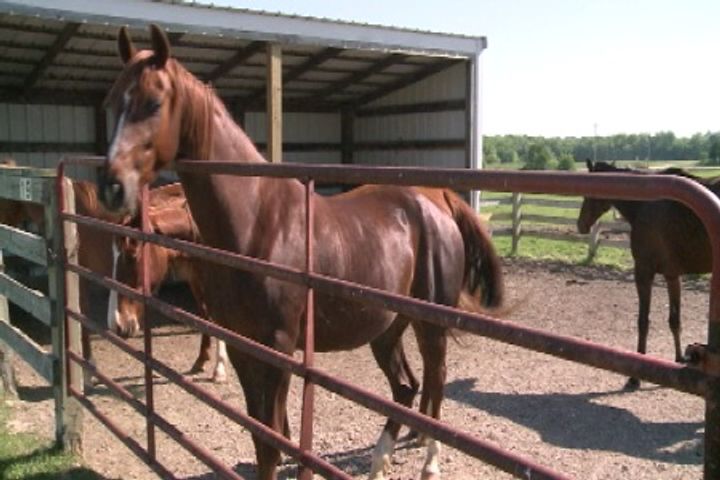 MOUNTAIN GROVE - Sue Wallis, CEO of United Equine, told KOMU 8 she will set up a horse slaughterhouse in western Missouri. Wallis would not disclose where exactly the slaughterhouse will go, but she plans to have it up and running by the end of the summer.

Slaughterhouse supporters think a horse meat processing plant is necessary to help improve the dismal horse market. Horse owners have few options when horses are too old or weak to work.

Euthenasia costs at least $75.00, and owners must still pay for burial costs. The low-value horses will only bring in $100-200 if the owner can find a domestic buyer, or ships the horse to Mexico or Canada for processing. Some owners just release the horses into the wild. A horse slaughterhouse would allow horse owners to turn a profit on horses that can no longer work or be trained.

Wallis claims the plant will initially bring 40-50 jobs to the town, potentially building up to around 100 positions. Opponents of the plant worry no one will want to take those jobs.

"Who wants that job? I think what they'll do is try their hand at it and then get in there and leave," said TC Wagner, a horse rescue owner.

Wallis had considered setting up in Mountain Grove, Missouri, but faced strong opposition from much of the town. Wallis had promised the same 40-50 jobs to the town with a population of 4,800 and a 9.5 percent unemployment rate.

"They don't want to see horse slaughter, or think about it, or have loads of horses going up and down 60," said Wagner.

Wallis ultimately decided Mountain Grove wasn't a good fit for the United Equine slaughterhouse, and moved onto western Missouri. Wallis describes the town as a rural environment with a high unemployment rate; the slaughterhouse will move an industrial park.

First, KOMU 8 talked to a county assessor and compared sale prices of the surrounding buildings before and after the plant closed. There were no significant changes that can be directly correlated to the horse slaughterhouse. Several county appraisers said the plant had no impact on residential property values in Dekalb. Dekalb County's total value assessments increased steadily from 2005-2009, again, showing no change related to the slaugherhouse.

United Equine released a statement saying the slaughterhouse will have a positive effect on property values:

According to promotional material, "It is likely an increase in value because of lower community unemployment and more economic investment and opportunity for the the community at large."

"In a plant, as proposed by Sue Wallis, would take a full time inspector. There's no money to pay them," said MacPherson.

Wallis said a combination of Missouri tax incentives, tax dollars and United Equine's accounts will get the company started. Wallis would not disclose any information about the company's finances or details about the Missouri tax breaks.

KOMU 8 has been unable to reach the Department of Economic Development to ask questions about the slaughterhouse tax incentives.

Watch the video for this story here: http://www.youtube.com/watch?v=DMBGosKxlKE&feature=youtu.be