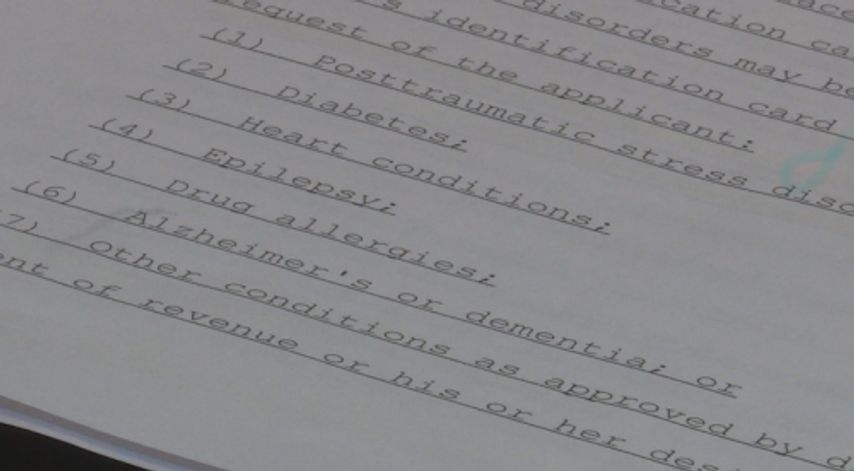 Andrew Liebig was pulled over in 2016. He said he was nervous, so he was quiet and dropped his wallet several times.

“The officer was very much in what I call 'interrogation mode,'” Liebig said. “'Have you been drinking? Have you been doing something?’”

He said the officer changed his demeanor when he learned something about Liebig.

“When I finally looked up at him and I said, ‘No, I have Asperger's,’ their entire course of questioning changed," Liebig said. "It went from more interrogation to ‘Well, how is your day going?’”

Liebig said an indication of his condition on his driver's license could have made the officer aware of his disability.

"If we can change their mind a little bit, change their approach to things, then I think it’ll be better in the long run," Liebig said.

The bill would add medical alerts to driver's licenses. Rep. Ann Kelley, R-Lamar, is sponsoring the measure after a constituent brought the issue to her. Kelley re-filed the bill this year after her husband, former state Rep. Mike Kelley filed it last year.

"He had a sister who was having a diabetic low and was not responding well," Kelley said. "So if the officer had known that, they would be able to help that person immediately instead of having to go through all the hoops."

Currently, the bill only calls for a symbol showing the individual has a medical condition, similar to the heart symbol now on Missouri driver licenses denoting an organ donor. Kelley said she would like to add information about the medical condition in addition to the symbol.

Ideally, she said, there would be a connection between a license plate and a driver's license, so an officer would know about a condition before even approaching the vehicle.

Kelley said drivers would have the option of having their conditions noted on their licenses and that it would not be mandatory.

"This is a choice that people with medical conditions, they want on there because they feel like it’ll be both advantageous for both them and to police officer or medical personnel or whomever," she said.

Kelley's bill calls for putting notice on the driver license for diabetes, heart conditions, epilepsy, PTSD, Alzheimer's, drug allergies and dementia. Others can be approved by the Department of Revenue.

Liebig testified before a House committee in support of the bill. He said the license alerts are "necessary" for all people with disabilities and medical conditions.

"It’s not just for me, it’s for other people out there, too. This could be a family member of yours that this could save," he said.

The transportation committee will vote on the bill Thursday.