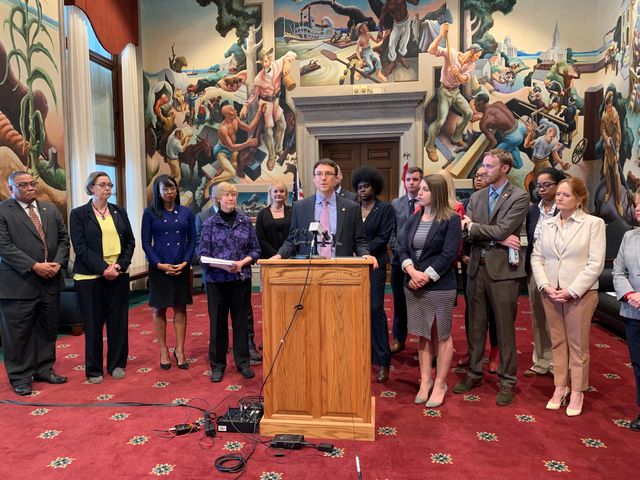 JEFFERSON CITY - House Democrats held a news conference Monday morning to discuss where they believe taxpayer dollars should be going for the 2020 fiscal year.

The Democrats' focus is prioritizing working Missourians, public education and people with disabilities.

Rep. Kip Kendrick (D) said the factor that surprised him the most with the House Budget Committee Chair's proposition was the 100 million dollars in general revenue towards state road funds.

"A 100 million dollars in general revenue is a significant amount of money, but when you are talking about roads and bridges and what is going to actually take to repair roads and bridges, it doesn't go very far," Kendrick said.

Rep. Brad Hudson (R) said he sympathizes with the Democrats priorities but they need to remember the importance of good roads.

"At the same time we have to understand without a proper infrastructure we are not going to be able to take those kids to school, especially in those rural areas where some of our bridges are crumbling," Hudson said.

Kendrick said three education aid programs - Access Missouri, Bright Flight and the A+ Program - are underfunded and needs to be prioritized.

Rep. Deb Lavender (D) said three years ago Governor Greitens cut community directed services by 37 million dollars. This resulted in some people with disabilities going from being independent to having to move into nursing homes.

Kim Lackey, Director of Public Policy and Advocacy at Paraquad in St. Louis, works on advocating for policies that improve the lives of people with disabilities.

"We were getting some information that really concerned us about possibly not funding and continuing a very crucial program called the Non-Medicaid Eligible Program for people with disabilities," Lackey said.

Lackey said over the past couple of years they have been fighting to restore the cuts towards their home and community based services.