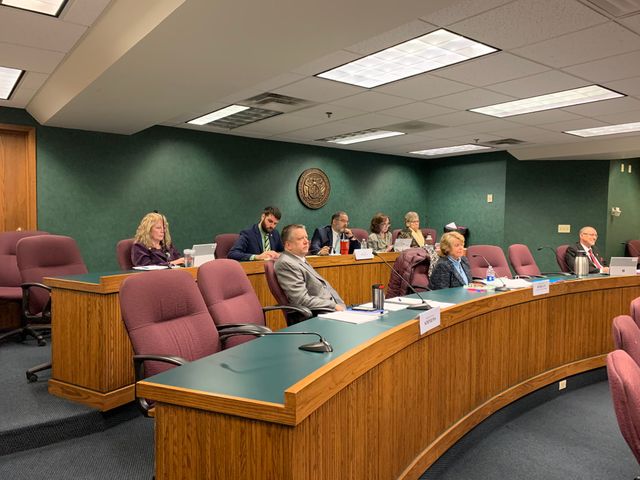 JEFFERSON CITY - State lawmakers on the House Elections and Elected Officials committee heard testimony on a bill that could change the initiative petition process.

The House Joint Resolution, which is sponsored by Rep. John Simmons, R-Washington, would have to be approved by voters on the ballot in November.

Currently, any citizens can submit a petition for new laws and constitutional provisions, or change existing ones by gathering enough signatures for an up or down vote on the ballot.

According to Simmons, those seeking to put a petition together only need to get signatures from six of the state's eight congressional districts.

"When you look at the way that the population base is in those eight congressional districts, you know, you're going to really need signatures for maybe four or five or six of those counties, because are the real populous counties in St. Louis, Kansas City, Springfield area," he said. "So you're really not getting a geographic representation."

But Simmons' resolution would change that. Instead of using the congressional districts, citizens would have to get signatures from 8% of registered voters in 2/3 of the state House of Representatives districts. It would change the requirements for voters to approve from a ballot in initiative from a simple majority to 2/3 of voters.

Lobbyist Ron Berry testified against the bill on behalf of the American Federation of Teachers of Missouri.

"For the most part, petitions are collected in every county, you have to collect them in two thirds of the congressional districts," Berry said. "It is not an easy process to get them the number of signatures are required."

Simmons said the process started as a grassroots way for citizens to make their voice heard, but it has since been hijacked by special interests on both sides.

"Someone can just spend a lot of money, get a really slick marketing campaign with a catchy phrase, and then people can decide that that's what they want," he said.

He cited the recent approval of medical marijuana by voters in 2018 as a prime example.

"We're now finding out that there's just problems with the way that that was brought to the people and didn't realize all the different scenarios that are problematic whereas selling licenses," he said. "It wasn't a language and the ballot measure about people that are getting a license for medical marijuana."

Berry said he believes these changes will not do anything to curb the role of money and special interests in initiative petitions. If anything, he believes it will increase it.

"The initiative petition process is so difficult to collect the required number of signatures that you do find a lot of organizations that paid circulators," he said. "So the idea that this is going to take the money out of it is just false. There's going to add money to it, because it's only going to be the people that have the money, they're going to be able to get the process completed."

"This notion that we would were hindering the people in some way is absolutely incorrect," Stacey said. "If they want something changed, we want them to get involved to change it, but we don't want a simple 51% majority to trample on the rights of 49% of the voters."

Others including Missouri Coalition for the Environment policy director Ed Smith said it takes the voters out of the equation.

"It is a continuation of the removal of the public from the decision making process when it comes to establishing policy in this state," he said. "It's a move toward the state lawmaker is more important than the folks on the ground in the communities that they serve."

Simmons bill would still require voters to approve it when they go to the polls in November.