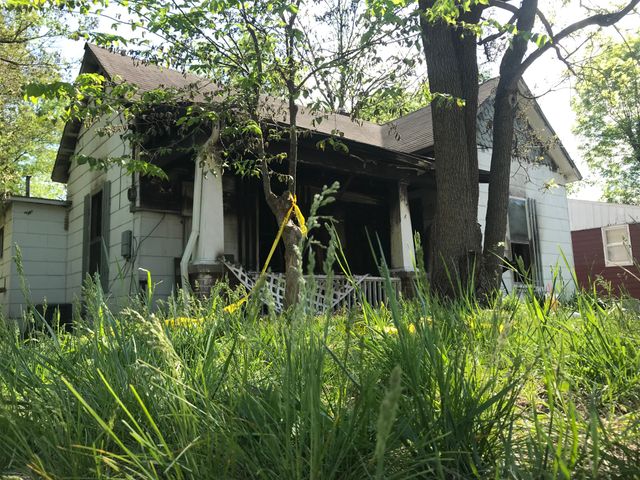 Assistant Chief Brad Fraizer said, “We’re still piecing together exactly what happened leading up to the fire and who was home at the time of the fire and again, it’s an ongoing investigation so there will be more information released as it becomes available.”

Neighbors stopped by the house today to observe the damage. They said they weren’t surprised by the fire.

Chris O’Gorman who’s lived on the street for 10 years and walks his dog by the house every day, said he stopped to talk to those who lived there whenever they were out on the porch.

“Once upon a time it was always rented by students or a family and then this last turnover cycle in August, people moved in who didn’t seem to get along with each other. [There were] people in and out of the house constantly at all hours day and night [with] loud music,” said O’Gorman.

“We have been called to that home before. It wasn’t for a fire call it was for another type of call.” said Fraizer.

Neighbors suggested drugs might play a part in the fire, but police did not confirm those suspicions.

“It’s a very eclectic neighborhood. There’s college kids, there’s home owners, there’s artists, writers it’s a very diverse neighborhood and that’s why the people who live here and own here love it,” said O’Gorman. “It’s close to downtown and yet it’s got a lot of character that you wouldn’t find in other neighborhoods.”

Mary Lee Johnston Community Learning Center is across the street from the home and Benton Elementary School sits less than a block away.

“It’s a really fine neighborhood and it’s just a shame that some people moved in there that didn’t take care of the place and didn’t care about it and that Benton Stephens Neighborhood now has lost another very unique home,” O’Gorman said.