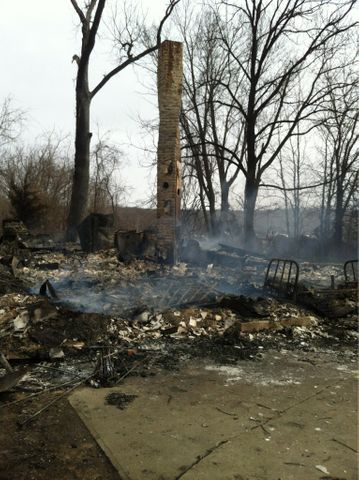 HOWARD COUNTY - Crews are investigating the cause of a fire that burned down a Howard County home early Thursday morning. Seven people were in the home at the time of the fire and managed to get to a neighbor's house safely. The home belonged to three fire fighters, two of which were working at the time, with four children living in the home.

At about 4:10 a.m. Jody Hundley, a resident, smelled a burning scent. Firefighters arrived around 4:30 a.m. to find the house completely engulfed. At that point, the home was beyond point of rescue, so crews just worked to contain the flames.

The family did not have insurance, and lost everything in the fire. The community is working to raise funds and collect items for the family.

Here's how you can help:

The Red Cross also set up an account to help the family at the Citizens Bank & Trust in Boonville.  The organization also provided three nights lodging in a hotel for the family, food and clothing.  River of Life Church on Ashley Road in Boonville will also be taking donations from 10 a.m. to 11 a.m. Saturday.