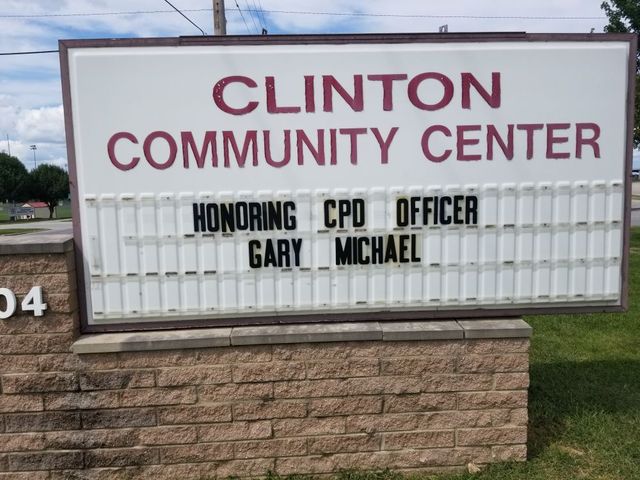 CLINTON - Police officers from around the country traveled to Clinton Saturday to pay tribute to the officer this small town lost days earlier.

Clinton Police Officer Gary Michael was laid to rest Saturday, six days after he was shot and killed late Sunday night during a routine traffic stop.

Officers from around the country and beyond, including places like New York, New Jersey, Georgia, Florida, Oklahoma and Canada, came to Clinton to honor Michael.

Officers from around the state of Missouri were also on hand to pay their respects to Michael.

Seventy-two-year-old Dennis Wolf, who has lived in Clinton his whole life, said the outpouring of support for Michael was unlike any thing he had experienced before.

In addition to officers, Patriot Guard Riders, an organization that attends the funerals of military members, firefighters and police, there were 167 motorcycles lined up outside the community center where Michael's funeral took place.

Reed Hickam, a member of Patriot Guard Riders, said it was an emotional day.

"He had a grandchild. I know what that's like. I've got grandkids, and it's just a sad day," Hickman aid.

Patriot Guard Riders took turns holding up a flag in honor of Michael, a duty Hickam said gives him pride.

"It's an honor for each and everyone of us to be here. We're taking turns standing that flag line up there to show respect for this gentleman. And we walk up there to relieve those people standing up there holding that flag, and they don't wanna let go of that flag because it's important to them to stand there and pay honor to that gentlemen," Hickam said.