Hundreds gather in Columbia to support the fight against Alzheimer's 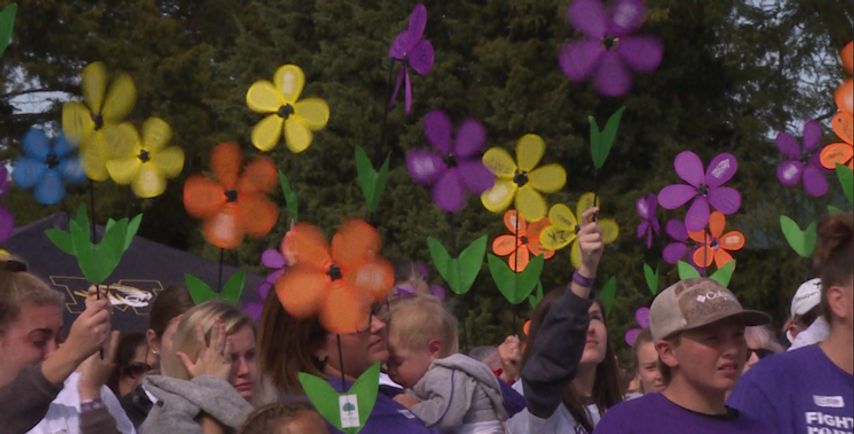 COLUMBIA - More than 600 people and 11 sponsors gathered in Cosmo Park for the annual Walk to End Alzheimer's Sunday afternoon. During the walk, participants held multicolored flowers in the air representing different connections to the disease.

In 2018, the Columbia walk raised more than $157,000. The money was part of more than $97 million raised nationwide for care, support and research efforts for those affected by Alzheimer's. According to the Alzheimer's Association, Alzheimer's affects nearly 5 million people in the United States and is the sixth-leading cause of death. The goal for this year's walk was to raise over $160,000.

Jayme Prenger, the chair of Columbia Walk to End Alzheimer's, said the walk has doubled in size over the last two years.

"This is a disease that is very hard on families," Prenger said. "We try to work on the education piece to help people understand what's going on and how to care for their loved ones."

Walk Manager Chris Cottle said his goal is to create as much awareness in the community as possible.

"I want this to be a place where people can come together and learn," Cottle said. “I think that we all need to come together as a community and create the opportunities to grow the walk and gain more funds for research."

Cottle's father, Brian Cottle, passed away from Alzheimer's in June 2017.

"The progression of my father's disease from diagnosis to him actually passing away was five years," Cottle said. "My dad meant the world to me. Watching the man who could do a lot of things, and not being able to feed himself or do the simple things in life was the most crushing thing I could think of."

Cottle said Alzheimer's affects everybody, whether someone is diagnosed or whether you are a friend or family member of someone diagnosed. But, Cottle said his dad's disease affected him in a positive way.

"Watching the grace and dignity that he walked through his disease with and how he handled himself lets me know that I can do just about anything in this world," Cottle said.