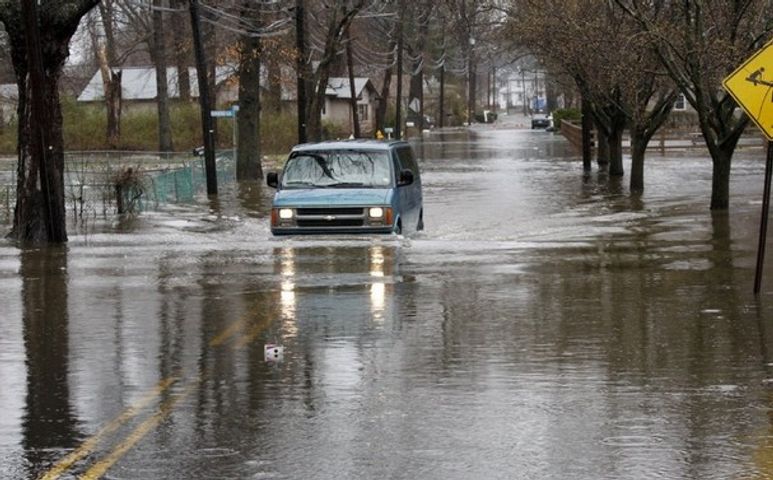 "Unscrupulous salvage operators and dealers often try to conceal from potential buyers the fact that vehicles have been damaged by a natural disaster," the National Insurance Crime Bureau's (NICB) President and CEO Joe Wehrle said in a news release.

"This doesn't surprise me at all," Blake Idel, manager of Transmissions Plus in Columbia, said, "There are just those types of people out there. I see a lot of vehicles in here that have had repairs done to them, then have tried to be sold as a perfectly functioning vehicle when in fact they were not, some of them even to the point where it would be dangerous to sell it to somebody."

Flood damage can cause corrosion to the car's electrical wires, mold in the interior, and total a car completely. Engines that have contact with salt water, like the water from Sandy, are rarely salvageable. Idel said there is little hope for flood-damaged cars, especially those that people attempted to drive while submerged in water.

The car's windshield wipers, power windows and motors will rarely work right after the flood, but in some cases once they dry out they'll work for a short period of time. The cars may run fine in the lot, only to shut down beyond repair when it rolls in to the driveway.

Mike Odneal, branch manager for the Mid-Missouri Better Business Bureau, said he typically sees cars cleaned up and passed off as good after big natural disasters like Katrina and Sandy.

"There's a lot of things you can do to check the vehicle yourself and if you're not fully confident you can always take it to a trusted mechanic or third party that might look at it in more detail," Odneal said.

Here are some tips from Odneal and Idel that you can use to check a vehicle for flood damage.

Odneal said owners selling their vehicles online are supposed to label totaled vehicles as "salvaged," however many times owners label them as something less alarming like "needs repair."

Before buying a used car, whether online or from a dealer, you can get a vehicle history report which will give you background details about the car. Vehicle history reports will typically show if the car has been reported as a lemon, if it has been flood-damaged, and its past service records.

Carfax.com and autocheck.com are two of many websites where you can plug in the car's vehicle identification number (VIN) and pay for a detailed vehicle history report.

The vehicle's VIN can be usually be found on the corner of the dashboard on the driver's side.

Because of the car scams with vehicles from Sandy, some websites like Carfax have created a free tool where you can plug in the VIN and immediately find out if the car has been flood-damaged or not. Click here for that tool.