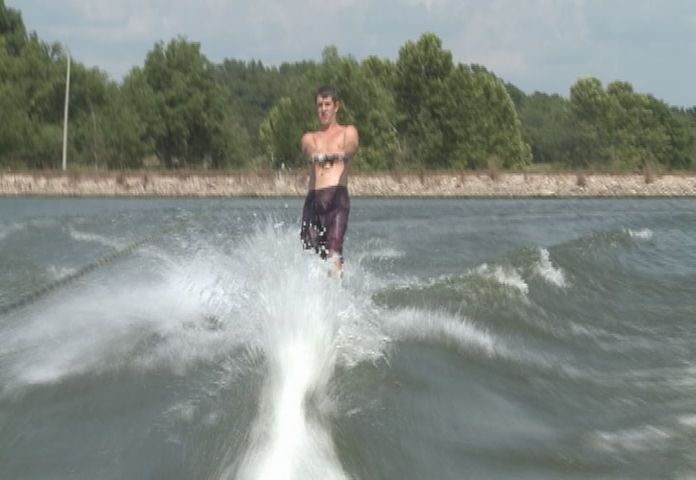 ULMAN, MO - Competitors from all over the state met Saturday for the Missouri Water Ski Tournament. Cole and Erin Kalkbrenner say water skiing is a big part of their relationship.

"We have a different bonding time relationship than other people because we share the same passion so when we get home from work all we can think about is talking about what we are going to do that night on our ski set," Cole Kalkbrenner said.

"We always you know, debate about skiing and talk about skiing and it's a constant conversation between the two of us," said Erin, "what's gonna go on and what we're going to do next and how we're gonna get better. We're both very driven, competitive people and so it's helpful to have someone else just as competitive as myself just to keep pushing me and always wanting to get better."

In fact the two met each other through the sport.

Cole Kalkbrenner says that it gets competitive between him and his wife.

"I would much rather lose to somebody else than her. I don't ever want her to beat me," said Cole. "There's never a time we go out there without a contest. You know today I fell on my first jump and she said well at least you didn't beat me on a single. A single is starting from the wake and just going over instead of cutting out far to the right and then coming back into the jump."

At the Missouri Water Ski Tournament, Cole won the trick and jump, and finished second in the slalom competition in the men's two division. Meanwhile Erin won first in all three of the same events in the women's two division. But who is better?

"That's funny," said Cole. "Who's better between us? She's definitely better than me. She's national champion. "I've only placed at nationals once."

"We always have some kind of competition that we're having against each other," Erin said, "I tend to always say that I always beat him, but that's not necesarily true."