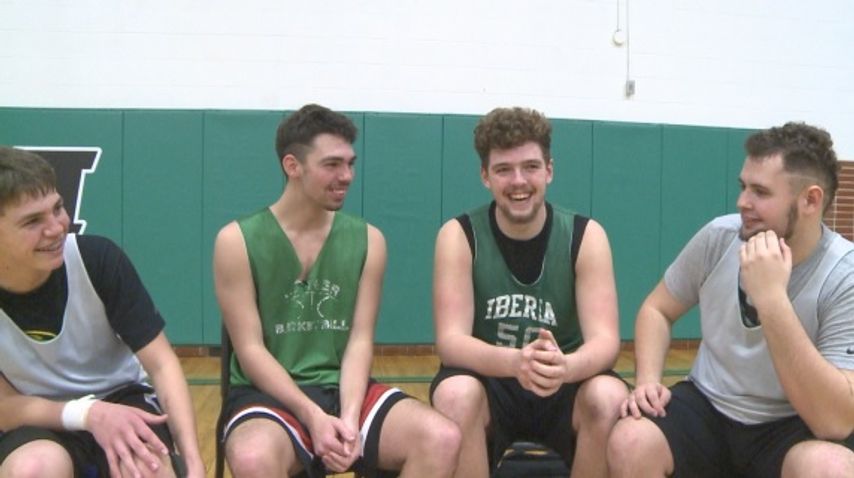 IBERIA - There is an old saying in sports that one's teammates are like family members.

For the Iberia boys basketball team, that statement is actually true.

Twin seniors, Dexter and Devon Frisbie, as well as brothers Riley Halley and Carter Halley all play on the same team.

"I really can't describe it. It's a great feeling to play with him," Devon Frisbie said. "We always fight, but that can never replace having him on the team."

But, the family ties don't end there. The Halleys and Frisbies are cousins as well.

Dexter Frisbie said, "We're so close to each other. Riley and I have been playing together since day one, as well as Carter and Devon. We're always going at each other, trying to help each other with their shot and everything and trying to improve one another."

The Halleys and Frisbies say the intensity ramps up when they play against each other.

Riley Halley said, "We compete against each other extremely hard. Coach doesn't know this, but me and Dexter have a block party, and whoever has the most blocks at the end of the season wins."

When asked who is winning the "block party," Dexter Frisbie and Riley Halley both laughed and argued over who was actually in front.

But, even though they joke with each other off the court, the chemistry is obvious on the court. Iberia currently sits at 18-3 with the two towering forwards taller than 6'7" leading the way.

"Riley knows what Dexter is going to do and Dexter has figured out what Riley is going to do. They just work really well together," head coach Steve Scholfield said.

During their high school career, Iberia has gone 100-12, with Dexter Frisbie and Riley Halley combining for 32.6 points and 15.5 rebounds last year.

Scholfield has coached the three seniors for six years and Carter Halley for four years now and said they have come a long way.

"They push each other. We still have a way to go with maturity," Scholfield laughed. "They understand things better. We try to talk about family a lot as a team, and it helps having them all around."

The cousins will move their separate ways next season.

"It kind of clashes you know. I love them both dearly," Riley Halley said.

The Frisbie brothes will stick together though. Devon Frisbie announced he will also be going to Missouri Southern to play football for the first time ever. Devon Frisbie said he actually has his brother to thank for the opportunity.

"He's a little skeptical about it, everybody is," Devon Frisbie laughed. "I went down there on his college day and met up with the coach, and he liked what he saw and wanted me to be on the team. I'm just grateful right now."

As for Carter Halley, it's going to be on his shoulders to carry on the success of his older brother and cousins that won the Frisco League Tournament last year.

[Editor's Note: The word 'college' was changed to 'high school' in the sentence that begins with: "During their high school career..."]

Beating pandemic fatigue during the last couple months of 2020