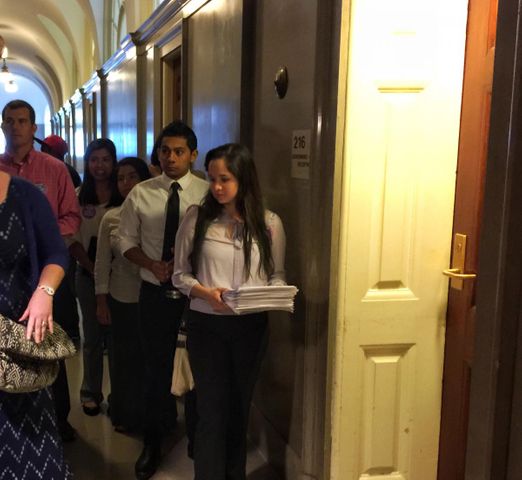 The students delivered more than 650 signed petitions and letters asking Nixon to re-affirm his efforts to stop the Missouri legislature from taking away scholarships for immigrants.

A recent bill would require students be permanent residents or U.S. citizens in order to get the state's A+ scholarship, which provides two years of free tuition at community colleges.

The Missouri house gave approval of the bill in May.

Supporters said the bill was meant to limit the number of people receiving scholarships so that only Missouri residents receive them.

"Because of this, I have to leave my home, which is Kansas City and my friends all around me," Maria Delatorre said.

Delatorre moved to the United States from Guadalajara, Mexico, six years ago and says she doesn't understand why Missouri is making it so hard for her to attend college.

Even though Nixon vetoed the bill in early July, Missouri still blocks funding to any public college or university that grants immigrant students in-state tuition.

"We're doing good things, we're being students," Delatorre said. "It's not like we're breaking the law or doing anything that's a crime. So I don't know why they're making it hard for us."

She plans to study neuroscience at Kansas State University but said, if she gets the aid she is looking for, she would attend a Missouri school instead.

Nixon said, instead of punishing students, the state should encourage those working hard.

William Wolff, with the Boone County Pacadyrms, has lived and worked in Latin America and said, while he thinks the state should help immigrant students, no funding should be taken away from Missouri residents.

"I think the legislature was right to limit, but I would like a compromise that would limit things that would be offered to these undocumented kids," Wolff said.

Nixon aide Michelle Mercer said the office would put the petitions into a public record that would be available to staff at any time to review.