In Missouri's juvenile justice system, kids can restrain other kids 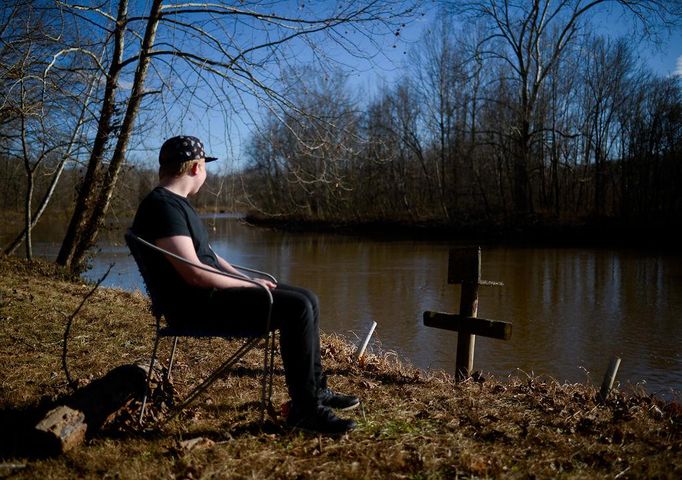 COLUMBIA - Gary Edge's son was the muscle at Cornerstone.

The 15-year-old, who was placed in the custody of the juvenile correctional home in Columbia, is big for his age: 5 feet, 10 inches, 180 pounds. So, Edge's son said, employees liked to have him restrain other kids.

"It seems completely insane to me," Edge said. "That's just asking for kids to get hurt."

During one restraint, his son suffered a concussion serious enough to send him to the hospital.

Staff aren't reenacting a version of the movie Fight Club at Cornerstone — they're following a state-sanctioned policy. In Missouri's juvenile corrections system, there are two options for physically restraining kids. On some occasions, staff will do it.

Most of the time, the youth have to handle it.

In the juvenile corrections facilities, staff can call on the wards in their care to hold each other down. There's no opting out — once you're in the facility, you become responsible for everyone there.

Proponents of the policy say it helps youth offenders work through their emotions without being put into isolation. Critics say it retraumatizes already emotionally scarred children.

There are four reasons staff can initiate physical restraints: to defend against attack, prevent imminent injury to self or others, prevent escape from the Division of Youth Services programs and supervision and prevent substantial property damage, according to a DYS policy.

When a staffer initiates a group restraint, the kids grab the arms and legs of whoever among them has been deemed out of control. The group holds them on the floor until the offender is no longer combative.

"This model emphasizes accountability, greater awareness of all youth and allows our staff and youth to work together to strengthen the team approach, ensuring the safest outcome for all involved," said Rebecca Woelfel, Department of Health and Senior Services public information officer, in an email.

Mark Steward, a former DYS director, said the peer-led restraints give the aggressor a chance to calm down and talk to staff members afterward about what caused their behavior.

"What they'll do is hold the kid until they calm down or settle down, and then [the staff] will talk with them and sit there and find out what happened," Steward said. "It's just a temporary measure."

Scott Odum, DYS director, said that other states use isolation, mace and other measures that Missouri does not.

“Having gangs of adults deal with the physical acting out as a response to an emotional crisis, is far more traumatic in my mind than having a humane process of young people working in concert with staff to put their hands on another young person, but in a supportive way,” Odum said.

Edge's son, whom the Missourian is not naming because he is a juvenile offender, said restraint efforts could last up to two to three hours.

Before children can be released from peer restraints, he said, they have to come up with a plan for their release and tell staff members. If they don't like the plan, staff members can continue to restrain the kid until they come up with another one.

"You're supposed to talk about your issues, but talking about your issues isn't necessarily a good thing when you've got a kid that is so mad he wants to hit everyone in the room," he said. "That doesn't help much."

Being the facility's enforcer comes with a cost. In the time Edge's son was at Cornerstone, he sustained a nose injury and concussion restraining two other kids. Medical records show the concussion was so bad he had to be taken to the hospital.

In one incident, he was one of several kids in the facility who were directed by a staff member to assist in a physical restraint. While they were pinning the kid down, someone punched Edge's son in the face. He said the punch broke his son's nose, but staff members disagreed.

As part of the restraint process, staff members are supposed to stabilize the offender's head while the children pin their arms and legs, for safety reasons. Sometimes, though, he said that responsibility fell on the kids. In one incident, he said his son was head-butted repeatedly while trying to stabilize the head of a kid being restrained.

The incidents left Edge's son feeling scared for his safety when participating in the restraints. After two weeks of limited physical activity following his concussion, "I asked if I could be exempt and try to help out other ways, and they told me no," the son said.

Odum said “it’s expected that young people participate... They see it as an opportunity to help create safety in the program, and help one of their struggling peers." He said each restraint is tracked as a critical incident, and restraint reviews are conducted several times a month.

In the six months Edge's son was in DYS custody, he recalls being made to restrain other youth upward of 30 times. By the end of his stay, he said restraints were happening almost daily.

"It was rough," he said. "When I first got there, we didn't have too many restraints, but then it got much worse. We had them probably every other day, and then every day right before I got out."

Wakefield, a parent advocate who works with families navigating special education, said that anywhere between 1 to 5% of her clients are in the juvenile justice system. Children with educational disabilities make up 24% of those receiving educational services from the Division of Youth Services, according to a 2018 report from the division.

Wakefield didn't learn about the restraint policy until three years ago, despite 30 years of experience in the field.

Guardians of a child she worked with called her, alarmed that their son was told he would have to help restrain the others in his facility. The guardians told her their child was extremely upset by the policy.

"That was very disturbing," Wakefield said. "When I went with the guardians to talk to the people in charge about it, they said, 'Oh, yeah, it's in our policy; it's allowable,' and then they showed the policy, and I was pretty much in shock."

By the time Wakefield discussed the policy with staff members, the child only had about 10 days left in the system, and she said the family wanted to move on. The guardians just wanted to "get him the hell out of there," Wakefield said, and not ever think about it again.

"It's traumatic, and he is not ever wanting to relive any second of that. I think that tells you something, that it was not the most mentally healthy policy for someone who is really dealing with a lot on their plate anyways and being so young," Wakefield said.

"The sad thing about that is, everyone gets traumatized and goes through that and don't wanna talk about it anymore, but then the next person is in that same situation, and you can't get change," Wakefield said.

Wakefield said in public schools, there's been progress toward finally requiring data collection and training on restraint, but that oversight hasn't spread into other systems like juvenile corrections.

"No one has been championing inside those systems like they have with public school systems," Wakefield said. "Because of that, it's been allowed to continue on and be a policy on the books, and no one is fighting to get it changed."

The science behind having kids restrain other kids is far from decided.

Ross Greene, a child psychologist, said he's never heard of any research on the topic. That lack of research doesn't mean Greene thinks it's an acceptable practice. Restraining children is what he calls crisis management.

"It's traumatizing, counterproductive, but like many other interventions, it doesn't solve the problems that are causing us to restrain kids in the first place," Greene said.

In his view, facilities hosting children with behavioral problems should be engaging in crisis prevention. Greene said this starts with helping the kids let employees know what's making it hard for them to meet expectations and then working with them to create a plan.

When children are placed in juvenile facilities, Greene said, they're in there for therapy and rehabilitation. Having them restrain each other can set that progress back.

"Restraint is the use of power," he said. "Many kids have trauma histories. The last thing you want to do is retraumatize the already traumatized."

Edge's son said while he was in the facility, he became friends with many of the other kids housed there. Those friendships made an already emotionally fraught job that much harder.

"Having to restrain them and watch them cry and talk about their issues was really difficult because there's a lot of kids that went through abuse," he said, "and when they'd have kids touch them, they relived what they went through."

Greene said there are no benefits to having kids restrain other kids.

"In a therapeutic facility, that's not a role that you put people who have been placed in the facility in," Greene said.  "Adults who do restrain kids are supposed to receive very specialized training in how to do it, so as to make sure nobody gets hurt. Staff sometimes do get hurt, and kids do sometimes get hurt. The idea of having kids restrain each other is ludicrous."

"Lots of places who do restraint and seclusion say they do it as a last resort," Greene said. "That they are ending up in that many crises that often tells us that something is very broken with the environment."

The injuries to Edge's son fly in the face of years of praise the Division of Youth Services has received for its approach to juvenile corrections. The "Missouri Model" has been upheld as a standard to which all states should strive, and many have made adjustments to their juvenile corrections system in order to emulate the model.

A report by the Annie E. Casey Foundation in 2010 said that despite multiple states adopting parts of the Missouri Model, none had incorporated Missouri's policy of children restraining other children. It's unclear whether that has changed in recent years.

Steward stressed that the policy only works in a system like Missouri's. Without the foundation of trust the facilities emphasize, he said, kids restraining other kids would be perilous.

Edge's son said that in Cornerstone, that trust was never earned to begin with.

"I'm thankful I did what I had to do to get out, but I also feel really bad for the kids that are still there," Edge's son said.  "Why would you take a kid that's under so much stress, and have 12 other people tackle him to the ground?"

This story is a collaboration between KOMU and the Columbia Missourian.