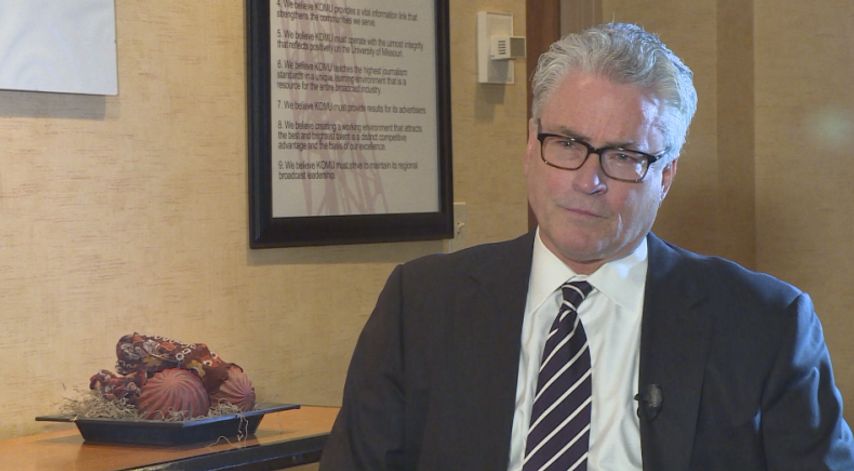 COLUMBIA – Craig O'Dear, a trial lawyer practicing business litigation in Kansas City, is throwing his hat in the hotly-contest ring for one of Missouri's Senate seats in November.

On Monday, O'Dear - an independent - turned in more than 20,000 signatures to the Missouri Secretary of State's office supporting his candidacy.

"I came to believe, increasingly over recent years, that our country is in trouble,” he said. "One of the major reasons, in my view, is an environment of hyper-partisanship driven largely by the leaders of our two political parties" (see full interview above).

O'Dear said as an independent candidate, he focuses on solving the problems of the country by working with people from different political ideologies.

"As opposed to having a loyalty to the party that I had chosen to operate within, and therefore my hands are largely tied, and I have to toe the line with that party, and be loyal to that party or I would be out of a job," he said. "I am not interested in that approach, that's the career approach to politics."

In 2016, President Donald Trump received 56.4 percent of the votes in Missouri, compared to the 37.9 percent of votes Hillary Clinton won.

Also in 2016, 51.1 percent of Missourians voted for former Republican governor Eric Greitens. In addition, the Republican Party controls both the House and the Senate in the state.

However, O'Dear said that political panorama would not stop him from becoming a U.S. Senator.

"What I have come to believe and understand is that plus 19 percent Trump vote was very substantially a vote against something," he said. "It was a vote against Hillary Clinton, but frankly more than Hillary Clinton, there was a view of this Clinton machine, and this 'careerism' where you've had the Clintons in politics for decades and you've seen them going to politics with no money, and now they're worth tens of millions of dollars."

In terms of the dominance of the Republican Party in the state government, O'Dear said that just reflects one party has been more effective that the other in getting its candidates into office in recent years.

President Donald Trump and Vice-President Mike Pence have endorsed Missouri Attorney General on his senate race. On the other hand, Senator Claire McCaskill is an incumbent seeking reelection.

O’Dear said he still has a chance to get to Capitol Hill.

"I have a number of experiences in my life, both as a trial lawyer but also in my personal life, where I have come up against challenges that people said, that can't be done, and I've done it," he said. "This idea of independence, and needing an alternative to this two-party, hyper-partisan warfare system we have today is an idea whose time has come."

O'Dear said healthcare reform would be one of his top priorities if he is elected to the U.S. Senate.

"We spend twice as much money per capita as any other country in the world," he said. "What I believe the model we need to move to is more of, call it a 'manage to care,' situations where healthcare companies take responsibility for the healthcare needs of a segment of the population, at a fixed price."

O'Dear also said he would focus on immigration legislation.

"These party leaders have decided is more important to blame each other and fight each other than to conduct the business of the American people," he said. "And it's not going to get solved electing one more party line R or one more party line D. You have to introduce an independent element in that negotiation and discussion, you have to introduce somebody who says, listen I am here to try to facilitate a solution.”

Regarding his contenders, O'Dear said he is not in the senate race to comment on either Attorney General Josh Hawley or Senator Claire McCaskill.

"I started with the presumption, and I still have it, they are good people with good intentions," he said. "And I am not running against anybody, I am running for something that I believe it's desperately missing in our politics today."

However, he said electing a party-affiliated candidate is not the solution for what he calls a problem on Capitol Hill.

"It is not possible to be that agent of change if you've been part of the problem for 12 years or if you come as a candidate who's committed to one of the parties," O'Dear said. "Because, what happens when you land in D.C., you are now injected into that hyper-partisan warfare."

McCaskill for Missouri Press Secretary Eric Mee responded to O'Dear's claims saying "sounds like the complaints of a lifelong Republican unhappy with his party. Claire has always been an independent voice who is willing to work with anyone from any party to get things done for the people of Missouri, and nothing will ever change that."