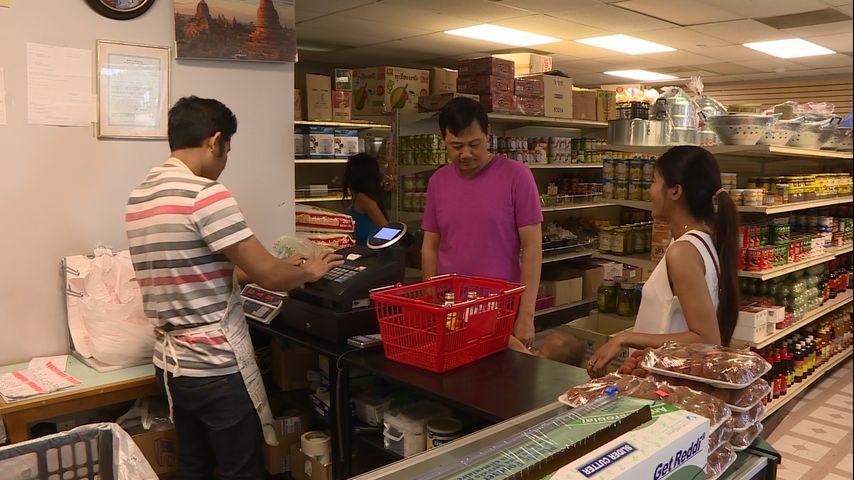 COLUMBIA – Although "Shwe Market International Foods" mainly sells Asian products and "Chihuahua Mexican Market" Hispanic products, both stores have one thing in common. They bring memories from a land far away.

Laldin Liana came to Columbia in 2015 from Burma. He says some of the foods in Shwe Market remind him of his home country.

"I like the store because, you know, there are some many kinds of my favorite here," he said.

Zo Sanga is also from Burma. He came to the United States nine years ago, and since then he has not been back to his home country.

"We are coming to this store because our favorite food is all here," he said.

Gene Raiti is American, but his mother’s father was in the U.S. Air Force and worked in a station in Taiwan, after World War II.

Raiti said in the Asian store he finds products that remind him of his childhood.

"It's comfort food you had as a kid, and if you can't find it anywhere else, it's really nice to have some place where you can go and get it," he said.

Spenser Crum is also American, but her husband is Mexican. She is a customer at Chihuahua Mexican Market.

"A lot of the drinks and things I like here, they don't sell in other stores at all," she said. "My daughter is half-Hispanic, so I kind of got accustomed to the food that her dad eats, and the things he buys."

But these stores also represent a "safe environment" for people who have to adapt to a new culture, after moving away from their home countries.

MU Assistant Professor of Sociology and Black Studies, Tristan Ivory, said the process of acculturation can be very traumatic for people who have spent most of their lives with certain cultural reference points.

"That can cause a great deal of homesickness, and issues in terms of identity and finding one's place in the society," he said.

Ivory said ethnic stores could help those people cope with the feeling of being an outsider and feeling unwelcome in a particular community.

Sanga said he comes to Shwe Market because he can relate to the owners of the store.

"We know these people, we are all Burmese people," he said.

Crum said the Chihuaha Mexican Market makes it easier for her husband to live in a foreign country.

"He feels a lot more comfortable. He misses being home, but being here, it's a lot easier when you have a store you can go to and get things that remind you of home," she said.

Ivory also said this type of store provides an opportunity for people to get to know other cultures different from their own.

"For the greater community at large, a lot of times ethnic restaurants, ethnic stores, cultural events, and cultural centers provide a window into parts of the world and other cultures beyond those that might be sort of long-term associated with a particular place," he said.

For that reason, Ivory said ethnic stores could also promote tolerance in society. He said those businesses allow people to come in contact with foreign cultures that could be similar or not too different from their own.

"I am not saying that ethnic grocery stores are the solution to all of the ills in terms of what's behind xenophobia or "other-ing" of people from other ethnic groups," he said. "But it can be one small step toward that."

Raiti also said Americans could learn about other countries by getting out of their comfort zone and visiting one of the international stores in town.

"It's a good way for people who aren't familiar with the culture and the food to see what's there, try new things," he said. "They can understand Chinese, Korean, Vietnamese, whoever, that much better by eating the foods that they eat."

"It opens people's eyes to other culture. It helps people understand, a little more, the way that other people live and their customs," she said.

Co-owner of Shwe Market, Soethu Halmyo, and co-owner of Chihuahua Mexican Market, María del Carmen Portillo, said they are happy to provide a piece of their native culture.