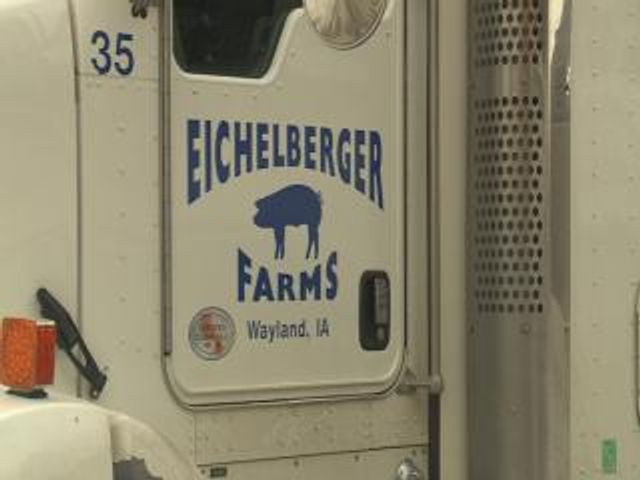 WAYLAND, IOWA- As some Mid-Missourians fight against the construction of a new hog operation near Kingdom City, some neighbors in one southeast Iowa town feel defeated.

Kim Andersen's family farm has been around for more than a century. Recently, a concentrated animal feeding operation owned by Eichelberger Farms was built near her land.

"We did ask Dave Eichelberger not to build," Andersen said. "We had a neighborhood petition and said please don't build this in our neighborhood and it was a very short, probably 5 to 10 minute meeting, he appeared to study the petition and continued to tell us that it was an ideal location."

Dave Eichelberger created Eichelberger Farms in the 1970's. Since then, his grain and hog operation has spread out to locations all over southeast Iowa.

While some neighbors complain of noise, smell, and unsanitary conditions, one town leader said the town of Wayland, Iowa has benefitted from the operation.

CEO of State Bank of Wayland, Richard Meyer said, "They started back in the 1970's and they've emerged and grown to become a tremendous influence in the community as far as an enterprise. Currently they have over 100 employees in their production facilities."

One hundred employees in a town of about 1,000 residents is a sizable number. Currently Dave's two sons, Brad and Andy, help run the business with him.

Although the business has certainly grown over the years, Andersen said she doubts the family-owned operation has significantly benefitted the area.

"If Eichelberger Milling and Eichelberger Pigs and so forth is so good for Wayland, Iowa, then why isn't there a boom in the housing market? Why isn't the school growing? Why aren't more businesses coming to Wayland, Iowa?" Andersen said. "My observation is because what he provides is low paying jobs that people don't want."

But swine veterinarian, Steve Menke, said the availability of labor supply is one reason why Eichelberger Farms decided to open a new CAFO in Callaway County.

The Eichelberger's said they use antibiotics when necessary for their hogs in the eight CAFO's they own in southeast Iowa. They said they hope to eliminate the use in Callaway County.

"The lack of disease in swine or swine pathogens makes Callaway County a very attractive place to maximize production without the use of antibiotics," Menke said.

With 7,600 sows and about 2,700 young females at the proposed site, production will no doubt be maximized. Sows have an average of 2.5 litters per year with around 10 to 12 piglets each. Eichelberger said they plan to truck the piglets out of Callaway County to a different location after the piglets reach about 12 to 14 pounds.

Another Iowa neighbor, Marj VanWinkle, said the number of hogs in such a small space is a form of animal cruelty.

"They're packed like sardines, they stand over slats in the ground where their waste falls," VanWinkle said.

Waste is high on the list of concerns for neighbors in Callaway County. After a 10,000-gallon hog waste spill from an existing hog farm earlier this month, nearby farmers are concerned that it could happen again.

But Brad Eichelberger said most people who have concerns aren't familiar with how new CAFOs are constructed.

"I think a lot of that fear comes from the old style of buildings where the pigs are outside on open lots and open concrete," Eichelberger said. "The newer buildings don't put off near the odor and this is a zero discharge facility so every bit of manure will be stored in the pit below the building and then applied on the ground with direct injection so it goes right into the ground."

In fact, brother Andy Eichelberger lives on a sow operation himself.

"Large CAFOs in the years past did raise stink, these newer barns, there is some smell right up close to them but driving by you won't be able to smell them except on a few days a year," Eichelberger said.

Andersen said she and her neighbors have experienced otherwise.

"You never know what to expect," Andersen said. "It's difficult for many of my neighbors to determine whether they can hang clothes on the line or plan an outdoor event. I have other neighbors who have health problems, breathing problems, asthma, and they claim when the odor is really strong and the wind out of a certain direction, they can't be outside."

As the battle continues in their hometown of Wayland, Eichelberger brothers said they are unsure if they'll send a representative to a public meeting in Callaway County on Nov. 6.

The Clean Water Commission, a section of the Missouri Department of Natural Resources, is hosting the meeting at Hatton-McCredie Elementary School at 7 p.m. After neighbors voice their concerns, commission members will then recommend what future steps should be taken.