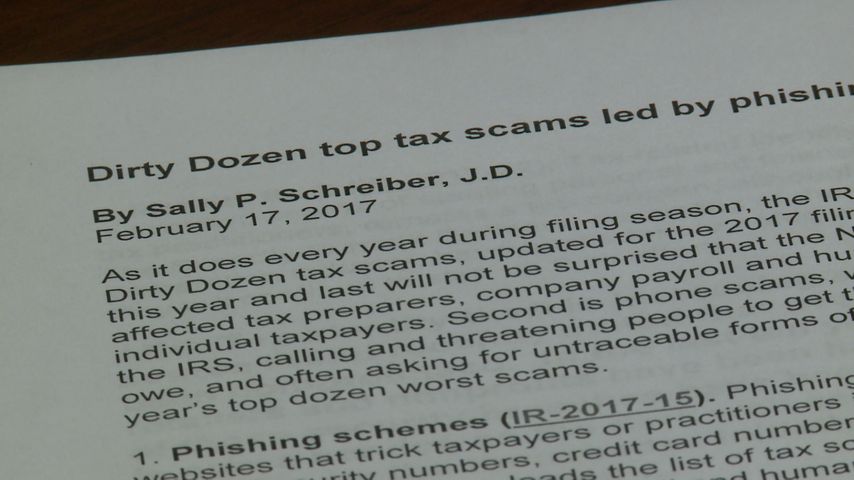 COLUMBIA - Tax-filing season is in full swing and some want to take advantage of it. The Internal Revenue Service released a "Dirty Dozen" list of this year's 12 common tax scams.

"We continue to work hard to protect taxpayers from identity theft and other scams," said IRS Commissioner John Koskinen. "Taxpayers can and should stay alert to new schemes which seem to constantly evolve.

According to a press release from IRS, taxpayers need to guard against ploys to steal their personal information.

"It's important to remember that the IRS doesn't ever use email to contact people," Schreiner said. "There are scammers out there that basically reproduce the IRS logo and make it look like a letter being sent via email demanding all these taxes."

Phishing: Taxpayers need to be on guard against fake emails or websites looking to steal personal information. The IRS will never initiate contact with taxpayers via email about a bill or refund.

Phone Scams: Phone calls from criminals impersonating IRS agents remain an ongoing threat to taxpayers. The IRS has seen a surge of these phone scams in recent years as con artists threaten taxpayers with police arrest, deportation and license revocation, among other things.

Identity Theft: Taxpayers need to watch out for identity theft and not give out personal information via phone or email.

Return Preparer Fraud: Filers should be on the lookout for unscrupulous return preparers. The vast majority of tax professionals provide honest high-quality service, but some take advantage.

Inflated Refund Claims: Taxpayers should be on the lookout for anyone promising inflated refunds. Warning signs are anyone who asks taxpayers to sign a blank return or promises a big refund before looking at their records or charges fees based on a percentage of the refund.

Excessive Claims for Business Credits: Filers should avoid improperly claiming the fuel tax credit, a tax benefit generally not available to most taxpayers.

Falsely Padding Deductions on Returns: Taxpayers should avoid the temptation to falsely inflate deductions or expenses on their returns to pay less than what they owe or potentially receive larger refunds.

Falsifying Income to Claim Credits: The IRS warns against inventing income to erroneously qualify for tax credits, such as the Earned Income Tax Credit. Sometimes people are talked into doing this by con artists.

Abusive Tax Shelters: Taxpayers should not use abusive tax structures to avoid paying taxes. The IRS is committed to stopping complex tax avoidance schemes and the people who create and sell them.

Frivolous Tax Arguments: People should not use frivolous tax arguments to avoid paying tax. Promoters of frivolous schemes encourage taxpayers to make unreasonable and outlandish claims even though they have been repeatedly thrown out of court.

Offshore Tax Avoidance: The recent string of successful enforcement actions against offshore tax cheats and the financial organizations that help them shows that it’s a bad bet to hide money and income offshore, the IRS says.

IRS Criminal Investigation works closely with the Department of Justice to shut down scams and prosecute the criminals behind them. It says perpetrators of illegal schemes can face significant fines and possible criminal prosecution.