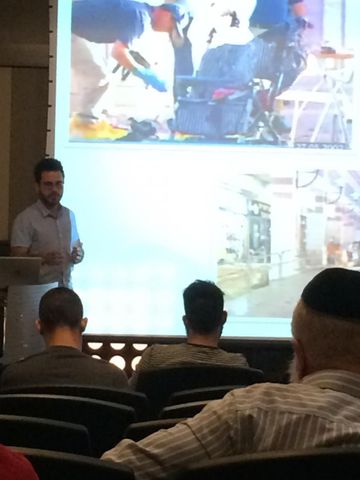 COLUMBIA - Hen Mazzig was 12 years old when he first experienced the Israeli-Palestinian conflict. He was on his way to get ice cream from a local shop when a Palestinian suicide bomber bombed the store.

Mazzig was one of two Israeli reserve soldiers who spoke at the MU Student Center Monday night at Stand With Us Israeli Soldiers' Tour.

"I feel like I'm inside the explosion.. the ground is shaking beneath me. The ice cream shop I was seconds from getting into was blown up," Mazzig said.

Mazzig served in a unit of the Israeli Defense Forces that ensured the safety of Palestinian civilians in the West Bank for five years.

"Every life is of worth. The value of life is the biggest value we have," Mazzig said.

Both Mazzig and his co-speaker, Matan Katzman, wanted this event to create an open dialogue about the conflict in Israel and Palestine.

At the event, people got the chance to discuss both sides of various issues involving the Arab-Israeli conflict.

The Association of International Development Agencies (AIDA), published a report signed by 46 aid groups encouraging Israel to lift its border blockade of the Hamas-controlled territory in Gaza. The blockade has been in place since 2007.

The report emphasizes the importance of having open borders and a lasting ceasefire agreement.

"Without economic, social and political stability, a return to conflict - and the cycles of damage and donor-funded reconstruction that accompany it - is inevitable," the report stated.

The report asked the international community to get behind the approach; however, some Israelis deny the existence of the blockade altogether.

"From the Israeli side there's no blockade. I think that Egypt needs to stop with its bombing. The last few months have been horrible... bombing the Gaza strip... and the Palestinians in Gaza were completely blind-eyed by the international community that's allowing Egypt to do it... and I think they need to be stopped," Mazzig said.

The report stated its hope is to establish lasting peace in the region that would benefit both Israel and Palestine. In order to achieve that goal, the report outlined what each side can do to ensure Gaza's rights.