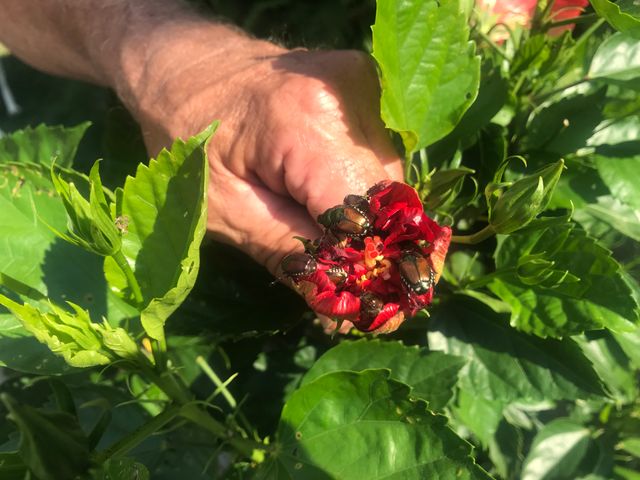 COLUMBIA - Japanese beetles are swarming mid-Missouri in the tens of thousands, wreaking havoc on gardens, crops and trees.

University of Missouri researcher Emily Althoff said this year has been especially bad because Missouri is on the western edge of the migration of the beetles.

The beetles came to the east coast of the United States in 1916 and have slowly been making their way westward.

“One of the reasons it’s so bad in Missouri right now is that there aren’t natural enemies here,” Althoff said.

Certain types of parasitic insects have helped control invasive beetle populations in other parts of the country.

“The parasitic wasps and flies have been introduced in New Jersey, but since they got to America after the beetles, they have slowly been catching up to where we are now in Missouri.”

Althoff and her team are trying to figure out how to control the Japanese beetles.

At Bradford Research Farm, the team set up giant traps of netting with pyrethroid, a non-toxic chemical, and two pheromones to draw the beetles to the traps.

“It has low toxicity to mammals, so it’s not really an issue if a deer runs into it or something like that,” Althoff said.

If the beetles walk around on the trap for as few as three seconds, they will die. They are similar to Japanese beetle traps sold at garden centers for regular household use.

At Bradford, the traps are intentionally set up between the forest and the soybean fields.

“We set them up here to catch them while they are flying to find more food. We know they will be flying this way, so it’s easy to trap them,” Althoff said.

They have the same pheromones used at Bradford, but also have bags to trap the beetles. When the beetles stand on the pheromone, they fall down into the bag and can’t escape.

Althoff said she advises against using pheromone traps if you just have a small garden.

“One method we do recommend if you have a smaller garden or a smaller yard is just hand picking them off of plants and putting them into a bucket of soapy water and then disposing of them,” Althoff said.

Duzan described how many people dispose of a full trap of beetles.

“What they tell you to do is wrap it up and throw it away,” Duzan said. “Well, it stinks badly. So, what a lot of people do is they take them before they get full, put them in another plastic bag, put them in the freezer, and that kills them.”

Duzan said people can use the dead beetles as in their gardens.

“The beetles are full of nitrogen, they’ll help your plants,” Duzan said.

Duzan has his own special way of disposing of his Japanese beetles. He feeds them to the fish in the pond on his property.

“It took them a while to get used to the taste, but now they love them,” Duzan said.

According to Althoff, the beetles can eat more than 300 species of plants.

“On some days there are just clouds and clouds of them coming in here. They are devastating,” Duzan said.

Adult Japanese beetles can live for 30 to 45 days after they emerge from the soil, which usually happens in late May to early July.

“The beetles will emerge ready to eat and mate,” Althoff said. “The female beetles can lay 40 to 60 eggs in the course of four to six weeks.”

Once the beetles lay their eggs, the grubs live in the soil and feed on the roots of plants until early October when they diapause, or undergo a suspended period of development, for the winter.

Althoff said the heat is not to blame for the massive swarm of beetles this year. The grubs are not affected by harsh winters when they are in the ground.