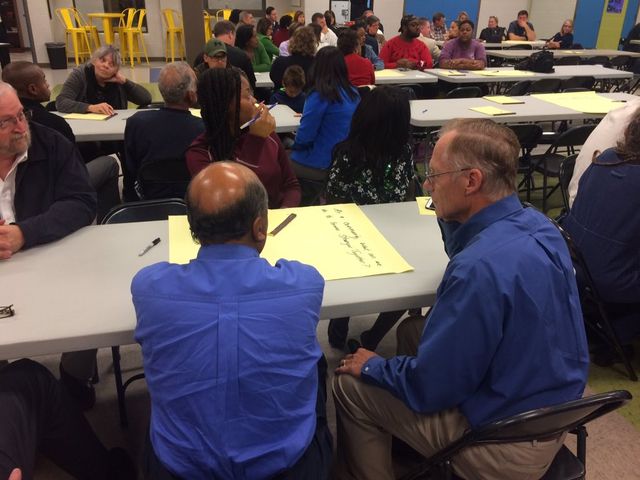 Attendees split into groups and write suggestions regarding what the school can do to better address diversity issues.

JEFFERSON CITY - Jefferson City Public School District held a town hall meeting on Tuesday to address diversity issues within the community. The meeting is the first of three town halls aimed at finding ways the community can “grow stronger together.”

The town hall comes after three Jefferson City Public School students posted a photo showing a car covered in expletives, swastikas and the n-word. The photo went viral back in September.

“We’re just wanting to have some discussions about how we can move forward as a community,” said JCPS Superintendent Larry Linthacum. “We don’t have all the answers and were asking folks from the community for their help.”

Community members were invited to give feedback on the district’s new diversity initiatives.

They include a concerted effort to recruit minority faculty members, a partnership with Lincoln University and increased dialogue among community members.

“I think this was progress and went very well,” resident Pat Wright-Tatum said. “I like the fact that everyone got a chance to get their opinion heard.”

People at the town hall made suggestions about how the school can change to better serve minority students.

One suggestion was to take the issue of diversity beyond the town hall meeting.

“Go out into the neighborhoods and to talk to your neighbors, talk to people we see in stores and talk to people who are different from us” said Jefferson City High School alum Claudine Ruboneka. “We have to have these conversations everywhere.”

The next two town halls are scheduled for Nov. 7 and Nov. 8.