Jeff Boschee Versus The Antlers, Round Two 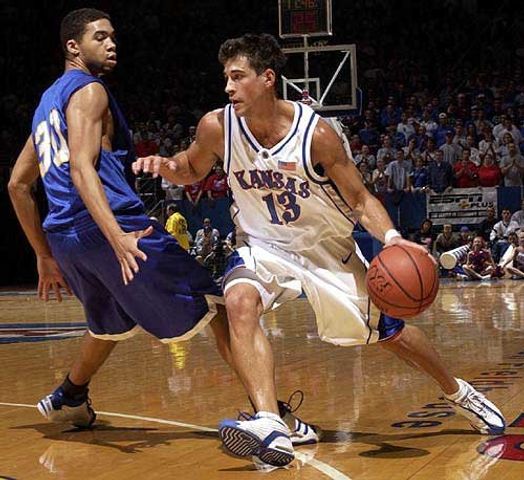 He pays taxes in the state of Missouri.

"It's good to be back," Boschee said.

A decade after earning All-Big 12 honors at Kansas in 2002, Boschee returned to Columbia for the first time Sunday as an assistant for Missouri Southern. Now in his third season with the Lions, Boschee previously played professional basketball in several leagues and also coached at a prep school in Kansas City.

He is long removed from his Jayhawk days, when he terrorized Missouri with his perimeter shooting touch and finished as the program's all-time leader in three-point field goals. Boschee finished 2-2 in four career games at the Hearnes Center, where he took his share of abuse from The Antlers.

"I remember them running through our hotel late at night, making phone calls to my parents," Boschee said. "They're pretty harsh, but it's all in good fun."

They're still harsh. About an hour before his team's game against MU at Mizzou Arena, Boschee cordially accepts an interview request and begins answering friendly, non-threatening questions about his playing days. In the background, The Antlers -- who were in elementary school when Boschee graduated from Kansas -- pelt him with verbal assault.

It hardly fazes Boschee, though. He's adjusting to life as a Missouri now, and he's even built a life in this state with his wife and daughter in Joplin. Located right on the border of Missouri and Kansas, Boschee's job allows him to mingle with both fanbases.

Luckily for Boschee, when the game began, a new SEC rule placed Missouri Southern's bench on the side opposite of the student section. The Lions, a Division II powerhouse but clearly overmatched against the 15th-ranked Tigers, fell out of contention early and never recovered in a 26-point loss.

But at least Boschee was safe on the other side of the arena.