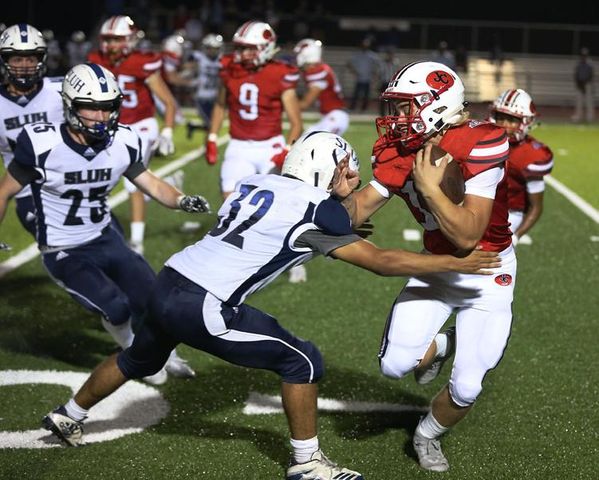 JEFFERSON CITY - Jefferson City's stadium sits at the bottom of a long, steep hill, and like the fans who walked back to their cars after the game, the Jays had a big slope to climb early against SLUH.

Although the Junior Billikens were an opponent the Jays dominated last year, getting beat consistently in the trenches from start to finish led to a reversal of outcomes this season.

An inability to keep senior quarterback Cole Gresham upright in the first half, namely the first quarter, was a game wrecker for the Jays. Gresham seldom had enough time to even consider lobbing a ball to his receivers and had to either improvise and try to get back to the line of scrimmage or was taken down almost immediately for a sack.

Jays head coach Terry Walker said that the game came down entirely to execution. Winning one-on-one battles is how games are usually won in high school football and the home team was unable to do that with any consistency.

This was a point of emphasis from Walker to his huddled team after the loss where he repeatedly told his team that more consistency was needed.

Among the individual performers who stood out on Friday night for Jefferson City were junior wide receiver Darrell Jones and sophomore running back David Bethune. Jones was quiet for most of the first half because of the pressure that Gresham was under, but once Gresham was given any time to throw, Jones uncloaked himself as a true threat in the passing game.

After going down 21-0 and giving the ball right back to SLUH near the middle of the second quarter, SLUH had a touchdown called back because of a block in the back call. Momentum shifted ever-so-slightly into the Jays favor and they took advantage. After SLUH's stalled drive, Jefferson City scored with a great catch by Jones in the front corner of the end zone to make it 21-7 going into halftime.

The second half was when Bethune got most of his opportunity to carry the football, which was a positive in the sense that it offset a lot of SLUH's aggressiveness in the pass rush. However, it led to longer drives for the Jays and took a lot of time off the clock, draining the Jays chances at making a comeback.

One positive that the Jays can take into next week is how their success running the ball in the second half led to some success with play action. The balance was a way to take some of the pressure off of the struggling offensive line and let their play-makers get involved. The Jays will need to do just that next game when they take on Chaminade at 7 p.m. on Friday in Jefferson City.