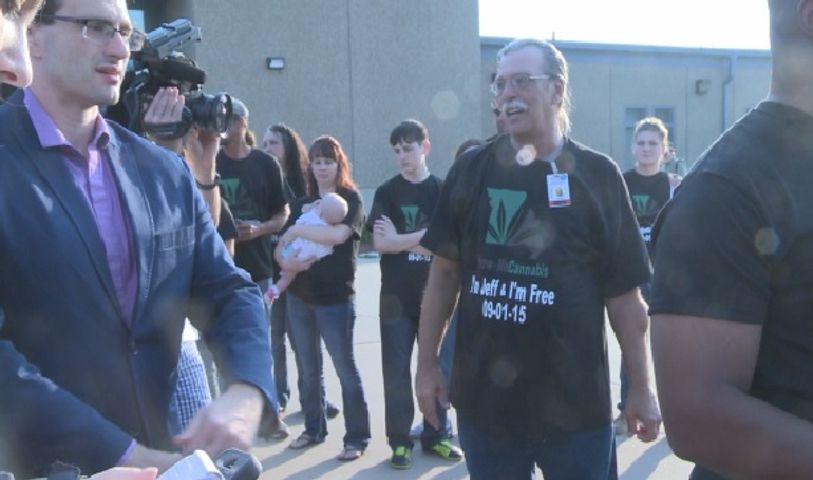 JEFFERSON CITY - Family and friends greeted Jeff Mizanskey with hugs and kisses as he was released from prison on Tuesday morning after spending 21 years there.

"We're going to keep fighting. If you keep fighting letting people know the truth about it, things will change. You'll never have to go through what I did... It's hell," Mizanskey said.

Now that he is a free man, Mizanskey plans on spending his time with his family and going back to his job in the construction business working on home remodeling.

He will focus on marijuana reform, working with the organization Show-Me Cannabis to fight for legalization federally.

"People need to get registered to vote, and vote.  That's the key," Mizanskey said. "It's about time majority rules instead of the minority."

"I hear it is helping our veterans from not killing themselves.  There are so many uses out there  We've been using it for thousands of years, and all of the sudden our government decided it was no good for us.  We need to change it."

Dan Viets has worked as the attorney for Mizanskey since May. He believes change needs to be made.

"There should not be a penalty for exercising your constitutional right to a trial, but that's exactly what happened to Jeff Mizanskey."

Mizanskey was also injured during his time in prison, working at a furniture shop. He had a broken leg as well a tumor on his arm.

"To leave something like that on a man, it is outrageous, it is inhumane," said Viets. "It is a horrible pretense of medical care that we give to prisoners. That's not supposed to be a part of the prison experience, that is cruel and unusual punishment."

Mizanskey was sentenced to life in prison on May 24, 1994 for his third offense containing marijuana. The first came in 1984, where he sold an ounce of marijuana to an undercover informant, and then was found possessing a half pound of marijuana when his home was raided the next day. The second offense came seven years later in 1991, when Mizanskey was caught again with possession. The third and final offense came in 1993, which turned into a sting operation that he was driving for a friend to complete a drug deal.

The judge then sentenced him to life without parole as a "prior and persistent offender."

"Nobody deserves that, not for marijuana," Mizanskey said.

Mizanskey, 61, became eligible for parole in May when Missouri Governor Jay Nixon (D) commuted his life sentence. This decision allowed for a parole hearing held on August 6, which deemed Mizanskey a free man in the coming month.

An online petition started by Chris Mizanskey, Jeff's son, on the website change.org has over 391 thousand supporters on a petition to Gov. Nixon to review Jeff's case.

"Its an amazing win for our family, we've got back up now," Chris Mizanskey said. "Words can't describe it, man."

Chris Mizanskey was fifteen years old when his father was give his life sentence without a chance for parole in 1994.

Jeff Mizanskey said, "I've spent a third of my life in prison."

Jeff Mizanskey to be released from prison on marijuana charges

Parole board to decide if Jeff Mizanskey will leave prison