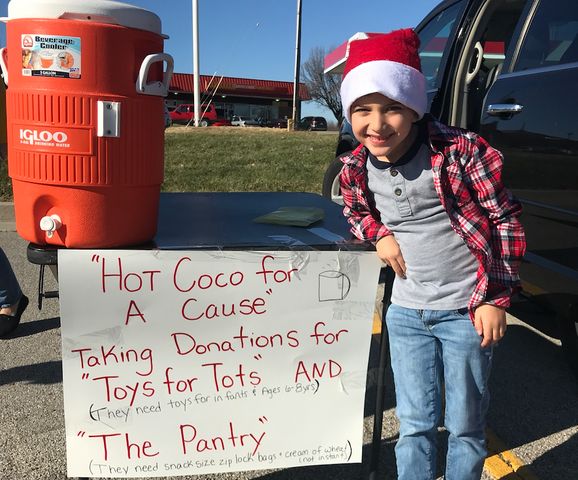 COLUMBIA – A six-year-old held a hot chocolate stand Saturday outside of a Hy-Vee in Jefferson City to help two local charities.

Hudson Patrick asked for donations for Toys for Tots and The Pantry. According to both organizations, the items that are most in need are infant toys and toys for ages six through eight, Ziploc bags, and cream of wheat.

Hudson said all he is trying to do is help people.

“I wanted to help people that don’t have toys or food,” Hudson said.

This wasn’t the first time he opened up a stand to help those in need. Over the summer, Hudson hosted a lemonade stand to raise money for the victims of hurricane Harvey.

Hudson’s mom, Allison, said she’s happy to see that her son has a big heart.

“It’s just awesome. He’s just so excited about it and he’s really taken everything that he’s doing and just ran with it,” she said.  “It’s just made him really excited to know that he’s helping people.”

Despite hosting multiple fundraisers for various causes, Hudson has never been able to see the impact of his generosity until now.

One donor at the hot chocolate stand said he sees a bright future for Hudson.

“It makes me feel good for that generation," Howard Booe said. "It’s great to teach your kids to always give back and try to help others.”

Booe said he grew up with less than he has now, and that is why he decided to donate to Hudson’s stand.

“When you grow up with less than a lot of things and you appreciate a lot more things when you get them, so you always try to give back,” Booe said.