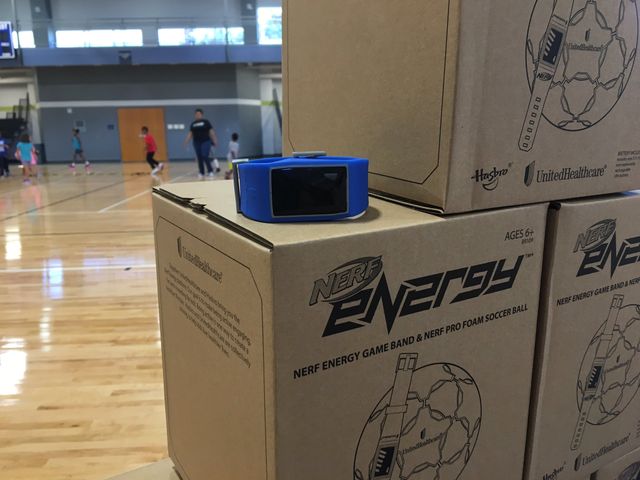 JEFFERSON CITY - Hasbro and Missouri UnitedHealthcare developed a wristband that can help reduce child obesity while getting kids up and running.

The Nerf Energy Kit, developed by Hasbro, is composed of a soccer ball and a blue tracker wristband that syncs with a smart phone app. The kit is supposed to make children want to run around and be active.

"It's like a little kid FitBit. It fits on their hand and it tracks the amount of activity they are doing," said the chief medical officer for UnitedHealthcare, Ravi Johar.

The Jefferson City Boys and Girls Club was chosen as the mid-Missouri location to receive more than 150 kits out of the 10 thousand UnitedHealthcare will donate to schools and community organizations nationwide.

Gillian Hardin, an 11-year-old member of the Jefferson City Boys and Girls Club, said she is excited to play around with the bands.

"I think it's kind of cool, because it's like Subway Surfer, except in your arm, and you get free tokens," she said.

The idea for the band came as a way to prevent and reduce child obesity. Seventeen percent of children ages two to 19 are obese, according to the Centers for Disease Control and Prevention.

"One of the biggest problems that's facing the youth in America, and we know, its obesity. We know that 28 percent of Missouri youth have a problem with obesity," Johar said.

The wristband keeps track of the wearer's activity and turns it into energy points, which turns into screen time for the child to play the mobile game.

"So, everyday, our members will come in and they will have their energy wristband charged and ready for them," said Stephanie Johnson, the executive director for the Jefferson City Boys and Girls Club. "We will take if off at the end of the day. Show them their results. There will be a point system, and they will have incentives to encourage them to earn more points and be more physically active."