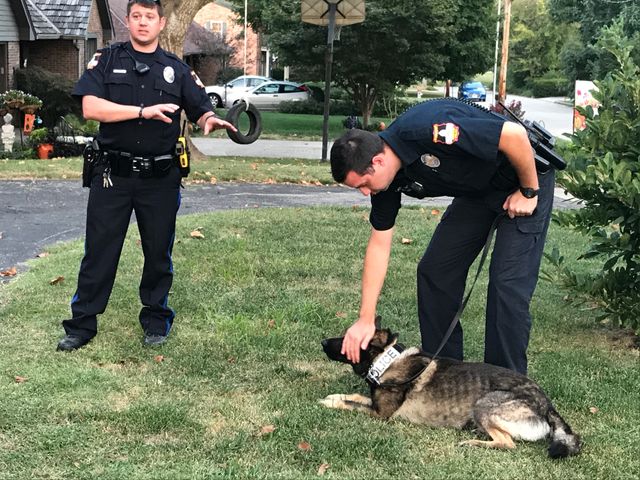 Bowman took questions from the community and shared his concerns as a police officer. Bowman said any motion during a traffic stop makes officers nervous.

The community celebration, or National Night Out, is a yearly celebration aimed at "turning porch lights on and watching for suspicious activity," in the neighborhood, according to Josh Hagemeyer, Jefferson City Police Department neighborhood watch and community watch officer.

But, Hagemeyer said the event has been going on since 1984 and has evolved into more of a block party, instead of neighbors sitting on their porch "watching the neighborhood."

"When we can unite as one, we can have several police officers out with eyes looking for suspicious activity or criminal behavior," Bowman said. "But when you multiply that with neighborhoods, people wanting to be involved in their community, it just branches out the safety of our community and we're excited to do that."
Jay Bosch, block captain of a Jefferson City neighborhood said he enjoys putting on this event for his neighborhood because of, "the fact that this is our ninth year that we've been able to do this and bring the police department together with all of our neighbors and to share a meal and share ideas."

Hagemeyer said there are 7 parties going on Thursday night in Jefferson City.

Bosch said his favorite part of the watch party is, "getting a chance to collaborate with the police department and we're going to talk about the statistics for the neighborhood and also the city to be aware of what kind of crime might be going on around us and making sure our neighborhood is taken care of."

According to Hagemeyer, National Night Out participants make up 38 million people in 16,000 communities in the US.

The National Night Out website describes the event as, "an annual community-building campaign that promotes police-community partnerships and neighborhood camaraderie to make our neighborhoods safer, more caring places to live. National Night Out enhances the relationship between neighbors and law enforcement while bringing back a true sense of community. Furthermore, it provides a great opportunity to bring police and neighbors together under positive circumstances."

In KOMU 8's viewing area, Pettis County and Osage County are the only registered National Night Out areas, according to its website.

If you're interested in starting your own National Night Out watch group, contact Joshua Hagemeyer by email at jhagemeyer@jeffcitymo.org or by phone at 573-634-6398.