Jefferson City cleaning up from tornado, watching out for flooding 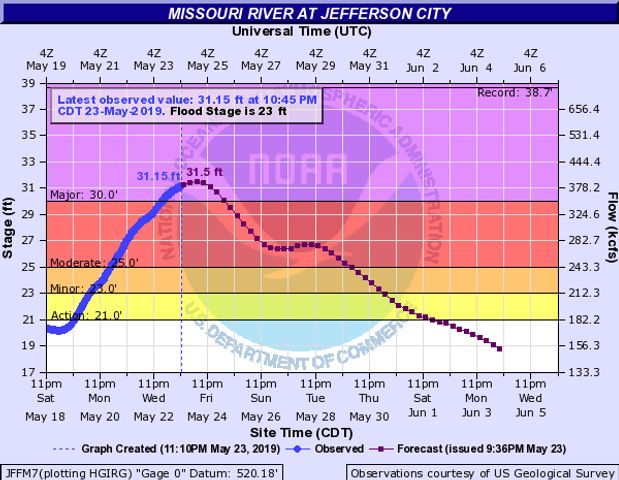 JEFFERSON CITY - As Jefferson City continues to clean up from the tornado on Wednesday night, it still has to keep an eye on flooding from the Missouri River.

The river has risen to than 31 feet in Jefferson City. According to KOMU 8 Chief Meteorologist Kenton Gewecke, this is the highest the river has been for awhile.

"The last time the Missouri River in Jefferson City was anywhere near major flood stage was in 2013," Gewecke said. "Now it's over 31 feet. The last time it was this high was 1995."

Major flood stage is 30 feet and higher. Airport property begins to flood at 30 feet. Railroads, the Katy Trail, and the Capitol View levee breaches at 31 feet. And, at 32 feet, roads in downtown Jefferson City begin to flood.

Gewecke said the river is predicted to crest at 31.5 feet and go down after that.

"The tornado damage won't affect the flooding at all, that's all just land-based. So, that's rainfall coming down or other water coming down the river," Gewecke said. "Kansas has seen a lot of rain and we still have melting going on also to the north from snowfall so everything is still flowing down the Missouri River."

"It's going to be a process," Parson said about rebuilding the city. "The other thing we have to deal with right now, as bad as these tornadoes are, we still got this flooding issue that we're dealing with every day. We're concerned about that and what the weather forecast is for the next 10 days."