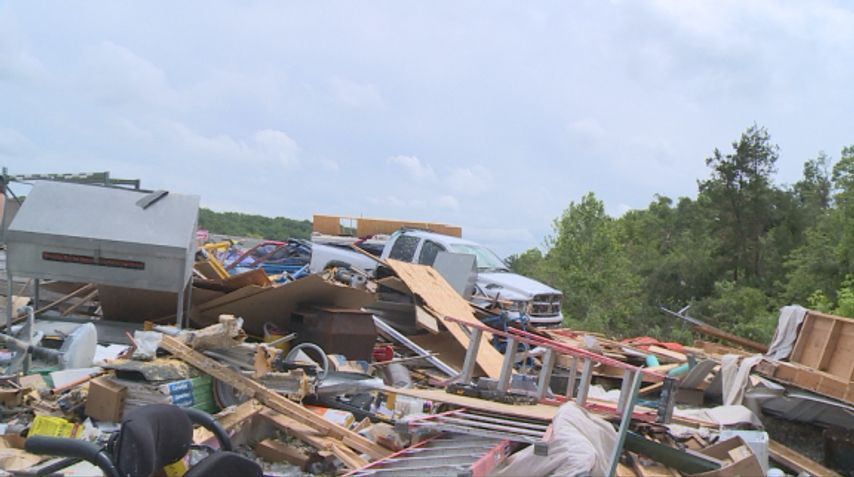 Henry Thompson is a math teacher and tennis coach at Jefferson City High School. He organized a group of his athletes to hand out snacks and drinks Sunday morning after seeing the devastation in the city.

“Thankfully, everyone on my tennis team was safe in their families’ homes were OK, but not everyone in town was so lucky, and so I think it’s important for us to not only recognize that, but also to do something to help give back to that,” Thompson said.

The group focused its efforts on a neighborhood near Lincoln University on East Dunklin Street where several neighbors had come out to cut down tree limbs, load up trucks with debris and comfort residents affected by the disaster.

“This town, we’re all behind everyone that’s in it, we’re all in it together and we’re going to get it rebuilt,” Thompson said.

Red papers marked several structures as unsafe, leaving some residents to sleep at local schools such as Thomas Jefferson Middle School. Members of the Jefferson City Fire Department noted which homes were unsafe, in case later responders risked entering a building that could collapse.

“When I got here, the building was gone,” he said. “None of this was on the news yet about Donnie Braun auto, so this whole place, I came in, there was nothing here.”

The lot is located alongside highway 54 in a pit. Schrimpf had assumed the area was safe.

“I just didn’t think the tornado would hit way down in this little hole here, I thought it’d stay up,” he said.

JCFD is warning people helping out with the tornado clean up to stay hydrated while working outside in the heat.

The Cole County Sheriff is asking citizens outside of Jefferson City to leave all vegetative debris along roadways for public works to pick up later.