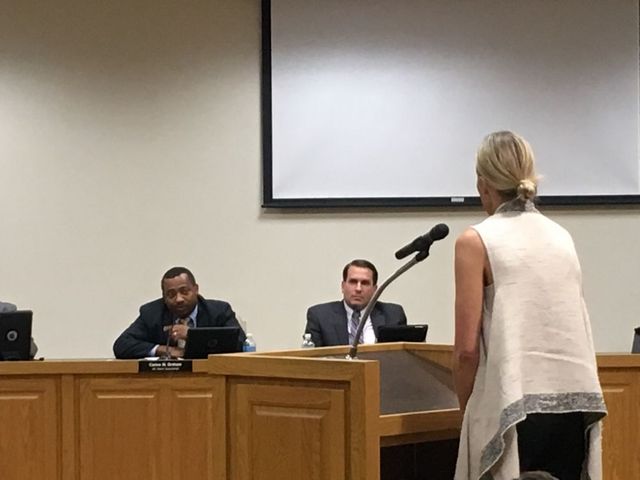 A representative from ride-sharing service Uber speaks at the City Council meeting in Jefferson City on Tuesday, Jan. 3.

JEFFERSON CITY - City council members voted to allow ride-sharing services, such as Uber, in the capital on Jan. 9.

The ride-sharing service will provide free rides from 7 a.m. Monday until 2 a.m. Tuesday.

Councilman Rick Mihalevich sponsored the provision and said the measure was needed to deal with the anticipated stress on the city's transportation services.

"We have filed bill in both the house and the senate, a state-wide bill, if passed would allow Uber, or any TNC to launch across the state," Lohmann said. "So I think that's our number one priority at this time.”

Right now some cities in Missouri including Kansas City, St. Louis and Columbia let transportation network companies (TNCs) operate. Before the vote this evening, Jefferson city regulations didn't allow for ride-sharing services such as Uber to operate in the city. Mihalevich said many safety concerns have prevented the city from permitting Uber and other TNCs to offer services. The summary presented to the council Tuesday night said the law department was still troubled by safety concerns including insurance requirements, car inspections, and background checks.

Lohmann returned to the podium at the meeting and said during the 24-hour period the company will provide insurance for the drivers, drivers will only be approved for the day if they have been properly vetted, and the company will work with local law enforcement to keep riders safe. Chief of Police Roger Schroeder also spoke at the meeting and said if the city council was satisfied with the answers the company provided then so was he.

The inauguration for state-wide officials will be held in Jefferson City on Jan. 9.

[The story has been updated with times Uber will run for free in Jefferson City.]