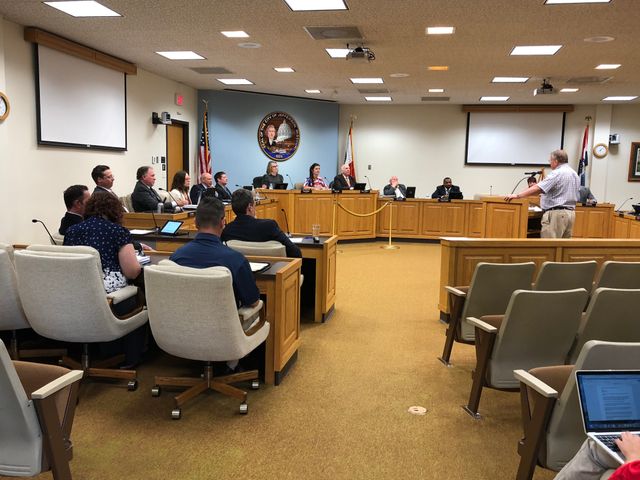 JEFFERSON CITY - Approving the proposal for a port authority is the first step for the development of a new port in the state capital.
The project is an initiative of the Jefferson City Area Chamber of Commerce, the Callaway County Commission, the Cole County Commission and the Jefferson City administration. The port would primarily be used to transport agricultural products.
On Monday night, the city council of Jefferson City unanimously approved the proposal for the port authority.
Council members also approved the allocation of $150,000 for the design of the project.
The Cole County Commission will also have to allocate $150,000 and the Callaway County Commission will need to pitch in $75,000.
After the council vote, Jefferson City Mayor Carrie Tergin showed her support for the decision.
“I am glad that Jefferson City can lead the way,” she said. “We really appreciate the partnership, we wouldn’t be even this far at all without all working together, and along with the chamber.”
Randy Allen, president of the Jefferson City Area Chamber of Commerce, said another $900,000 from a federal grant will be added to the funds from the three other groups to help pay for the designing phase.
“We are asking them, in addition to approving the three-way agreement, to put money toward a local match to have the port authority go for a federal Build Grant,” he said. “The grant itself requires a 20 percent local match, and that’s what the $375,000 would do.”
Allen said the process to create a port authority began about two years ago. It would be the entity in charge of managing the port.
“The port authority would create a public port,” he said. “The public port would have the powers to develop the business, through the port authority, to contract with business that might want to operate the port, and to also contract with business that want to locate at the port.”
“Cambridge Systematics” completed a port feasibility study in June that evaluated two proposals for the project.
The first option would include the development of a single port on the South side of Jefferson City in an area currently under the control of the Missouri National Guard.
The second option, in addition to the port in Southern Jefferson City, contemplates another port on the North side of the river in Callaway County in an area currently owned by OCCI, Inc.
According to the study, the cost of building the first option would be about $54.8 million. Building both sides would cost approximately $59.9 million.
Currently, there are two ports on the Missouri River in the state, one in Kansas City and an inactive one in Boonville. The rest of the ports in Missouri are on the Mississippi River.
The Missouri River is mostly used for transportation of agricultural products. However, raw and finished steel products, gravel, cement and other raw construction materials are also transported through the river.
Right now, those materials are primarily brought to the central Missouri area by truck.
Tergin said the public port would have economic benefits for the economy and the transportation infrastructure of the state capital.
“Being so central in the United States, especially in Jefferson City as well, our location makes us ideal in the river," she said.
According to Cambridge Systematics, over a period of 25 years the project could generate an economic impact of between $200 million and $581 million.
Allen said, “If you have a port and you have the option, in a particular location, to use different transportation that would attract businesses.”
Although the port would mainly be used for the transportation of agricultural projects, Allen said with time that could change.
“One of the things we see in the future is more containerized cargo that is coming out of these ports,” he said. “If you ship across the ocean, both to Europe and to Asia, is all in containers.”
In addition to the funds for the designing phase, both county commissions and the Jefferson City administration could have to provide additional funds during the construction phase.
“If we have any grants, federal grants that would come around next year for construction, those would also need to have some kind of a match,” Allen said. “We are hoping that maybe the private sector, who gets more interested in this operation of the port, would come to the table with some local money.”
Allen will meet with the Cole County Commission Tuesday morning, and with Callaway County Commission Tuesday afternoon.
Both have to approve the proposal for the port authority and the allocation of funds.
Allen said MoDOT could revise the proposal for the port authority at its next meeting on September 5.