Jefferson City fire brings tears and a bit of relief 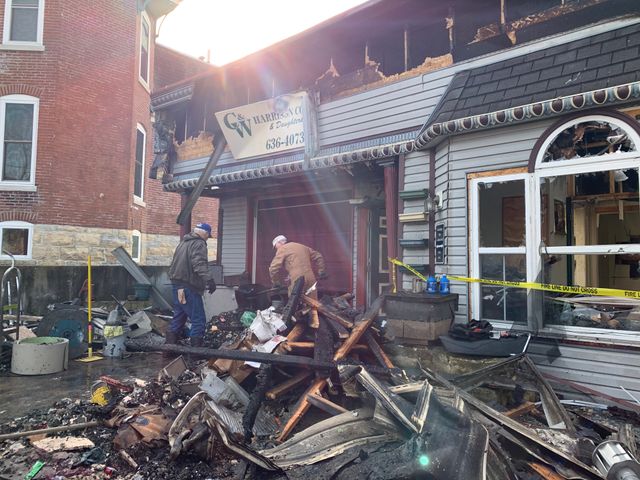 JEFFERSON CITY - Winn Harrison said he was gone for only a few minutes. Then he got the call: the business he built from the ground up 41 years ago was burning.

The Jefferson City Fire Department sent 33 firefighters to try to save the CW Harrison roofing company building Thursday night. Before the fire was even out, Harrison said the department told him his building was a total loss.

Jennifer Slayton lives next door to Harrison's business. She said she smelled smoke and thought Harrison was just using his wood furnace.

"Then I thought the smoke was really heavy," she said. "I went to the kitchen, looked out the window and saw the roof was on fire."

Friday morning, friends and family joined Harrison to start the long cleanup process. With rakes, shovels and a chainsaw, the group started to work through the rubble. Harrison said the help and support brought him to tears.

"It's nice to have friends," he said. "Good friends are hard to come by, and I seem to have a few."

Not everything in the building was lost. Those cleaning up found a waterlogged Bible, clothes, and even some of Harrison's father's stamp collection.

Harrison said the fire means his retirement will come a bit sooner than he anticipated.

"I think I'm finished," he said. "I was trying to retire and this is kind of rushing me into it."

Harrison said before the fire, he wasn't sure how he was going to sell all of his stuff. Now, that's not something he really has to consider.

"It's almost a relief," he said. "Almost, but it's still literally 41 years up in smoke. Just like that."

Harrison said he's still in a bit of disbelief, but cleaning up the rubble is his priority.