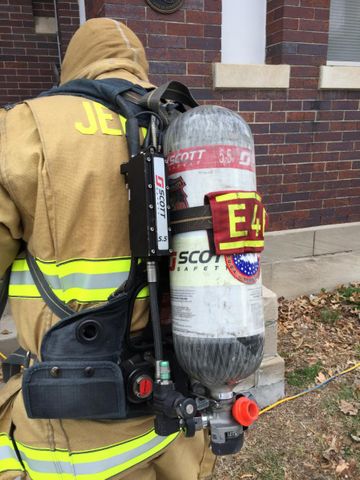 JEFFERSON CITY - The Jefferson City Fire Department is the first fire department in the nation to implement a new tracking software.

The new Scott Safety's Imperium Accountability Software allows fire fighters to be tracked while on the fire ground and have their air and assignments monitored while battling flames.

"It's a tool that our incident commanders use to make sure we are working more efficiently on the fire scene," Turner said, "And more importantly the safety of our fighters on the fire scene."

The air tanks that supply firefighters with air are also larger and lighter than their previous supplies. The tanks now hold 45 minutes while the previous ones held 30 minutes of air.

The tracking devices within the air tanks allows firefighters who could get trapped or disoriented to have a device called a "pack tracker" that can signal assistance. The device sends a signal back to a separate tracking device that helps them be located sooner.

The new system works on all 80 airpacks the department has as well as a device within each truck. Turner said when firefighters arrive every morning they swipe a card to check into the system. The system will then know who will be working at all times and which truck they will be designated to.

Once the truck responds to a fire, the program will update the command post of which individuals are on each fire.

The department has 80 air packs that have this new system, including devices on trucks and command vehicle laptops.

Tuesday was the second training session for the new system, and there will be more until all personnel are trained on the new equipment.