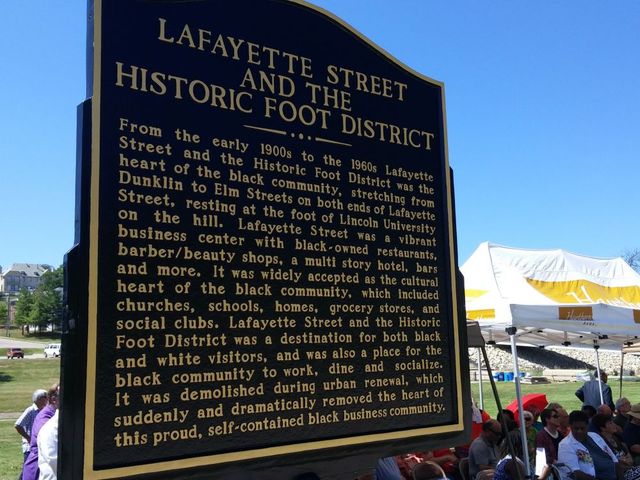 JEFFERSON CITY - Residents and community leaders unveiled a memorial plaque Friday in a part of Lafayette Street known as the Foot District. One goals was to make sure Jefferson City's historic black district is not forgotten.

The Historic Foot District stretches from Dunklin to Elm streets. It was once an active business and residential area for black people during segregation. But the buildings were torn down in the 1950s and '60s as urban renewal took its toll on the area.

The Foot District was once home to hotels, drugstores, restaurants, barber shops, doctor's offices and more.

Brothers Art Brown and Glover Brown lived in the district with their father until they had to move in 1957.

"He had three commercial properties and he owned 14 pieces of residential property and they were all taken as a result of urban renewal," Glover Brown said. "So not only did we lose our legacy, our livelihood, we lost our home."

The brothers are members of The Friends of Lafayette Street and the Historic Foot District.

"We had everything that we needed to survive here, and then when integration came about, we had to leave," organizer Art Brown said.

It wasn't just the urban renewal project that changed the neighborhood. The construction of U.S. Highway 50 and the Lafayette Street Interchange project played a role.

The Browns got involved with preserving the community's history when the city was considering changing the name of Lafayette Street.

"We felt that there was a rich history here and that we didn't want to see that destroyed," Glover Brown said.

Brianne Greenwood, the senior historic preservation specialist at the Missouri Department of Transportation, was one of the speakers.

Greenwood said MoDOT is in the process of interviewing anyone who lived, worked or visited the district so future generations can understand what life was like in the area's heyday.

Glover Brown said, "I'm hoping that, in the years to come, that some of these stories, not only from our families but from other families that lived in this community, will begin to come to light."

Past residents of The Foot District stood with one another in the ceremony.

"To see them come today and come together as if 50 years had never passed, that was really moving for me," Glover Brown said.

The Browns said they plan to hold events in the area to build local interest, as well as attract investors to build businesses there.