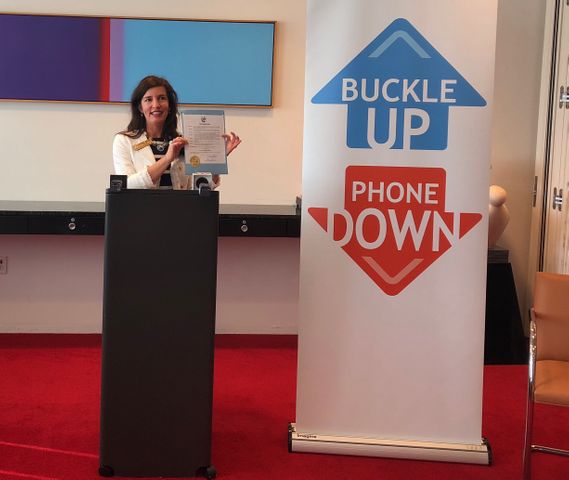 JEFFERSON CITY – Jefferson City Mayor Carrie Tergin announced that October 20th would be recognized every year as Buckle Up, Phone Down Day.

The mayor joined MoDOT, Missouri Highway Patrol and Central Bank officials on Friday to raise awareness for MoDOT’s Buckle Up, Phone Down initiative to keep drivers and passengers safe while on the road.  The goal of the initiative is to encourage businesses across the state to accept the challenge and ban cell phone use when using company vehicles.

"This is really something that saves lives.  We really sometimes take for granted, because we use our cell phones so often, but we cannot use them.  We cannot be texting in the car while we're driving," said Tergin.

The news briefing gave multiple speakers the platform the express their concerns about safety while driving including Kayle Denny, a survivor of a 2007 car crash.  The consensus after the briefing was that her words were the most resounding of the day.

“I really appreciated her saying you hear all the statistics but behind each statistic is a person,” Human Resources Director for Central Bank Company Christine Ellinger said.

Central Bank is one of the businesses in Missouri that has taken the pledge to promote the use of seatbelts and discourage cell phone use among their workers.  Officials at Central Bank said it is important that their employees and their families are safe while on the road.

“I want our employees to understand that there is no piece of business, no customer, no manager, no peer that comes before their own safety,” Ellinger said.

According to the MoDOT website, the leading cause of car crashes in Missouri and the United States is distracted driving; texting increases the risk of car crashes by 50%.  In 2016, 946 people were killed in Missouri traffic crashes.  Of that number, 63% percent weren't wearing a seatbelt.

“Unfortunately, our laws are not as strict as they should be and as they need to be because this is deadly.  The consequences are just really terrible and we need to advocate for this,” Tergin said.

MoDOT is encouraging people who are accepting the challenge to upload a photo to their website and share the challenge with their friends and family.