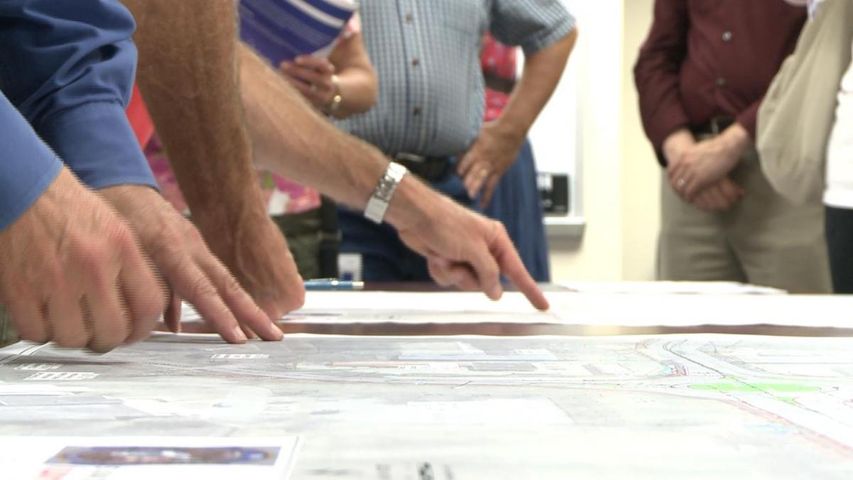 JEFFERSON CITY - Jefferson City Public Works officials met with residents at a public forum on Thursday to get input on a roundabout that is set to be constructed at the intersection of Stadium Boulevard and Jefferson Street where U.S. 54 connects.

According to Jefferson City city engineer David Bange, the intersection is a very congested area and has been the site of multiple accidents in the past.

He said putting the roundabout in will help alleviate traffic and make the intersection safer.

"We have people going from Lincoln University, Jefferson City High, Trinity Lutheran, everyone from all directions, and it just gets really busy," Bange said. "This should help make everything move smoothly."

Bange said he's seen a lot of positive feedback from the community. Members and pastors from Trinity Lutheran Church are particularly invested in the project, as their church and the church's parochial school, Trinity Lutheran School, are located at the intersection.

"With all the parents and kids coming in, we just add to the traffic, and it would be nice to see it a little less congested there," associate pastor Sam Powell said. "I have personally seen a few accidents happen at the intersection, and I think a roundabout will help get rid of those."

Jefferson City resident Vaughn Whiting lives near the area and is a fan of roundabouts himself.

"I'm from Fort Worth, and I grew up learning how to drive on roundabouts and they just make so much more sense," Whiting said. "I think people are afraid of roundabouts because they're not used to driving on them, but as soon as they get used to them, it will make a huge difference."

No one at the meeting was against the construction of a roundabout at Jefferson and Stadium but wanted to make sure their concerns about the design were heard.

Bange said at this time his department and the city have completed their designs and are now in the process of buying all the land they need to start constructing.

"We need to acquire a bit from the Break Time there and then some from the [Trinity Lutheran] church," Bange said. "Before we even start construction on the actual roundabout, there will be some construction moving water lines and power lines."

Bange said if everything goes as planned, Jefferson City will start building the roundabout in the spring and complete construction by August of next year.