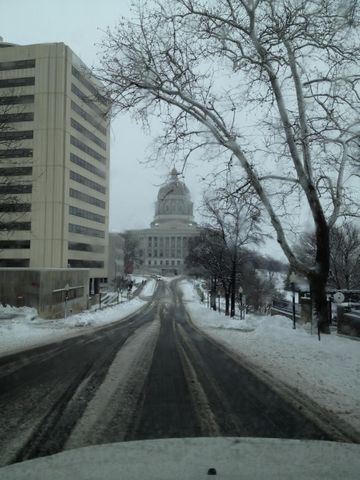 JEFFERSON CITY -Tuesday's winter storm brought a few more inches of snow to Jefferson City but an even larger amount of sleet and ice.

The storm left the capital city with a mess to clean up but the City of Jefferson public works department was able to have the roads fairly drivable in time for Tuesday's morning commute. The roads were good enough to drive if extra driving time was allowed.

The snow calmed down around 7:00 a.m. in Jefferson City, but the sleet and ice continued until around noon on Tuesday.

MoDOT officials reported fewer weather related accidents on Tuesday than the winter storm last week. Even though the roads were being reported as cleared, MoDOT was still encouraging drivers to continue to take extra caution when driving on the roads.

Director of Public Works for Jefferson City, Roger Schwartze, was still a bit concerned about the overnight temperatures Tuesday night and into early Wednesday morning and the potential of the slush on the roads freezing.

Officials at Ameren Missouri reported there were a small amount of weather-related power outages in the Jefferson City area.