Jefferson City students educate the public about the Constitution 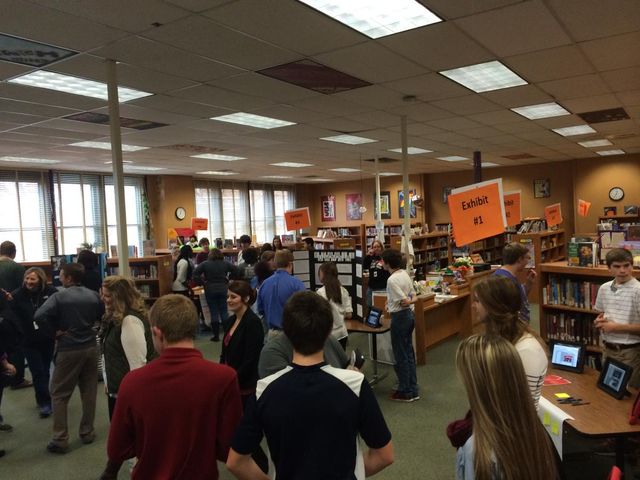 Business Management and Technology students transformed the school's library into a museum with exhibits about constitutional topics ranging from freedom of speech to euthanasia.

Student Mitchell Huston said the project challenged his peers in a unique way instead of simply sitting in a classroom.

"We get out and get the information we need instead of getting lectured by teachers," Huston said. "I think that lets people learn more if they're doing it themselves."

First-year teachers Amanda Aspey and Jimmy Janes collaborated with each other on the project.

Janes said learning about the amendments is essential for students.

"Some of these things that every U.S. citizen takes for granted, these kids really grasped it. (They) took hold of it and come up with these great ideas to show why it's really important," Janes said.

Huston's group presented about the fouth amendment. Groups had to write narratives about their rights and provide brochures and posters.

In addition to all of that, groups incorporated a digital element as well.

'We had to create a website,"  Huston said. "We had a link to our narratives and link to videos about people whose rights were being violated."

Aspey said her students stepped out of their comfort zone while giving the presentations.

"I saw them all talking, even my shyest students had something to say," Aspey said. "They were very confident in talking to the adults that approached them today."

This is the first time Simonsen has put on the event.

Teachers, parents and members of the community visit the library of the Simonsen Ninth Grade Center for the Constitutional Rights Museum on Friday, Nov. 14, 2014, in Jefferson City, Missouri. The academy clusters, offered for the first time this year, allow Simonsen students to shape their education experience by selecting a designated interest area. (KOMU/Jordon Shultz)