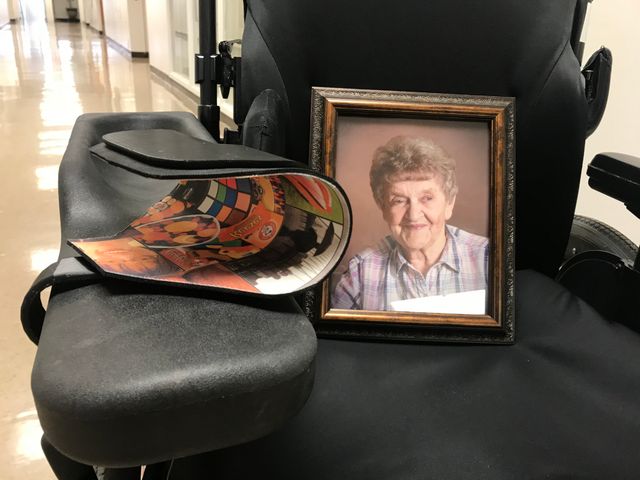 JEFFERSON CITY - 82-year-old Dolores Fork, who was paralyzed by a stroke, was able enjoy considerably more mobility before she died, thanks largely to the work of young student who created a 3D printed wheelchair extension for her.

“She said she was having trouble with her arm after having a stroke and she couldn’t control it,” said 18-year-old Kaleb Tuinstra. “She was constantly clenching up and she couldn’t keep her fingers straight.”

At the beginning of the year, Tuinstra's mechatronics teacher Matt Yeager was looking for another project to assign. Like in the past, he turned to coworker Linda Heckman.

She said, “He came back to me and says, ‘Hey, do you have another project that one of my students could work on?' And at the time, because mom just had a stroke, it was front and center in my brain. And so I said, ‘Well, I would like something done for my mom’s arm, if that’s something you think would be relevant.’”

The project was exactly something Yeager was looking for and he quickly had a student in mind, Tuinstra.

“He just was a natural choice for that,” Yeager said. “It’s a sensitive conversation and you have to have a certain amount of maturity to do that.”

Tuinstra set out to use the classroom 3D printer to build an arm piece for Fork's wheelchair. The first step was the designing process.

“Kaleb is very quick and fast because he’s worked on lots and lots of projects. So, for him to design something like that, it took him maybe two and a half hours to design,” Yeager said.

Next Tuinstra digitized his design on computer software followed by about six hours of printing on the 3D printer.

Hover over the image below for a tour around Nichols Career Center's mechatronics lab. 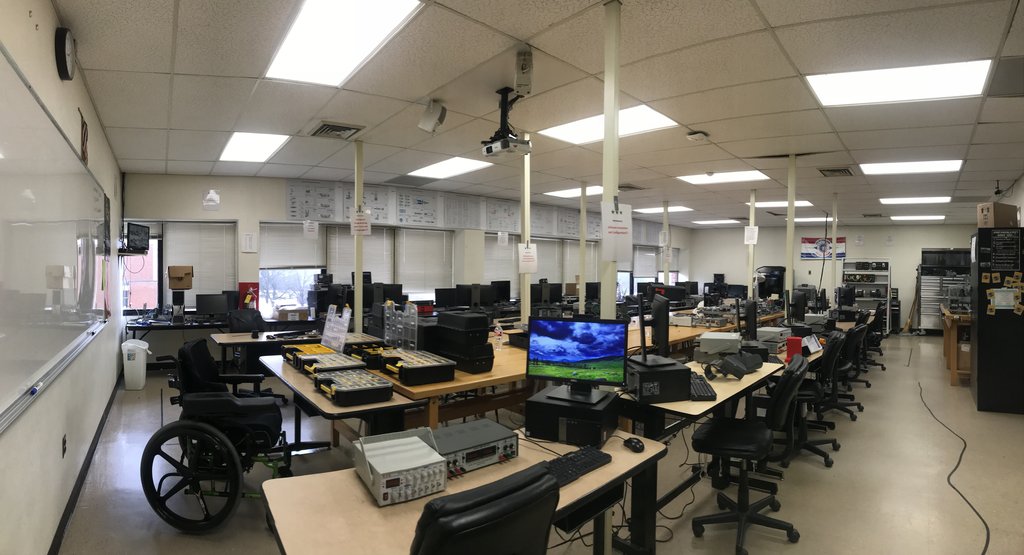 Heckman took the first design to her mother to try.

“After we showed her what it was gonna do, she was all excited to help out,” Heckman said.

Fork wore the piece for three weeks and improved her motion by 90 degrees. Meanwhile, Tuinstra was working on another design to focus on straightening Fork's fingers.

Tuinstra went to visit Fork to see her progress and deliver the second arm piece.

“She came out of the room in the wheel chair and she just, she was smiling and happy and it was just nice to see. It was already on there; it wasn’t like it was put on for show or anything. She was already using it,” said Tuinstra.

Fork was unable to speak in complete sentences, but she and Tuinstra found a way to communicate.

“She was always smiling and that just made your heart melt, seeing her smile and seeing that she wasn’t in pain anymore and her arm wasn’t twitching or you know, closing up, or you know, she wasn’t uncomfortable.”

On Feb. 21, Tuinstra’s visit was publicized in the local newspaper on the front page. Two days later, Fork sustained a fatal stroke. She died two days shy of her 83rd birthday.

Heckman said the sudden turnaround was a shock.

“We truly went from like the highest point and my brothers and sisters got to see her in her best on that Thursday. And then you get the call that Friday afternoon, the very next day, and she checked out. She had another stroke and she, she went that quick,” Heckman said.

Tuinstra said he is gratified he was able to help Fork while she was alive.

“I have done projects for myself or for other people, but they were purely ascetic, or you know, simple,” Tuinstra said. “This was the first one I’ve done that would help medically or make someone’s life that much easier.”

Heckman spoke highly of how Tuinstra worked with Fork. She said he was proud but "so caring."

“He saw her condition, and he was able to see what he really did. I mean, it was obvious what he did, and he had a smile from ear to ear,” Heckman said.

She said her mother understood everything that was going on.

“She couldn’t talk because of her stroke, but you could see it, she was full of smiles and so was he, and that’s, right there, meant a lot,” Heckman said.

The center’s director, Sharon Longan, said she sees the project as a huge success.

“It’s so exciting and, you know, you’re just so proud to see your teachers really take on your vision of how can we put real-world, predicative and unpredictable stations in the hands of our students and at the same time, reach out to the community to find those projects so it’s really exciting to see it when it all comes together,” Longan said.

Yeager said the mechatronics classes are hoping to partner with Capitol Region Medical Center in Jefferson City to do similar medical projects in future semesters.