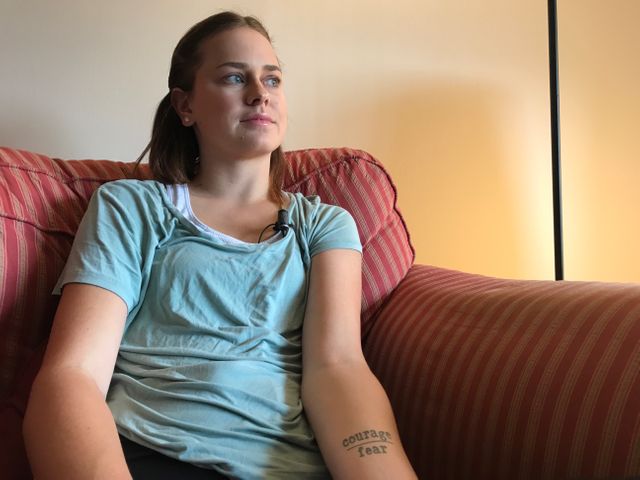 COLUMBIA – Jess Soehlke is like many college students: involved on campus, surrounded by friends, active in Greek life.

But earlier this year was another story. Beneath the surface, she was "drowning" in mental health issues.

“For most of my life, I’ve actually struggled with anxiety and depression,” she said. “But I never really got any help for it or anything like that until I was in high school.”

Professional therapy helped her for a little while, she said, until she went to college.

“This past year I kind of took a downfall a little bit with anxiety and depression,” Soehlke said about her junior year. “It became a lot for me to handle.”

She was having panic attacks four to five times a week making it impossible to lead a normal life, she said.

“I was very much against myself as a person,” she said.

Thoughts like “you’re worthless” and “nobody wants you here” and “you would be better off if you were dead” constantly ran through her head, she said.

“On July 25th, actually, I ended up self-harming myself and cutting myself and also had the intention of wanting to take my own life,” she said.

That day she was admitted to the MU Psychiatric Center. Two anxiety-filled days dragged by.

“I was alone and kind of had to do a lot of thinking on my own and there was a lot of crying,” she said. “I felt like there was no way out and it was scary, but I did, moving on from there, realize this isn’t for me.”

After some rough realizations and a new motivation for life, Soehlke decided to spend her final year of college back at the University of Missouri.

“I take it day by day,” she said about her mental state. “It’s still very hard to process that I was at a point where I didn’t want to be on this planet anymore.”

Parker Donovan shares an apartment with Soehlke and said the situation was hard for everyone.

"She's my friend and everything. I love her. She's my roommate," he said. "But it's something she also sees me struggle with everyday. So it's kind of a two way street.

The two help each other fight the hardships of mental illness.

Soehlke is now a member at the Counseling Center Advisory Board at the University of Missouri to help other people who suffer from anxiety and depression.

“The more I share, the better I feel,” she said.

Through public speaking, a blog, and her new position at the center, Soehlke found a new purpose.

A tattoo on her left wrist reads “Courage over fear.” It covers the place where she self-harmed.

This year, Soehlke uses her past experiences as leverage to "swim to the surface" in her battle.

“Essentially that’s everyday,” she said. “That’s what I’m trying to do is come up from under the water.”

The MU Counseling Center recently hosted its 6th Annual Take Action Carnival where Soehlke participated in the dunk tank. Her friends and roommates showed up to show support and dunk her several times.

The MU Counseling Center website has information on coping with mental illness. Anyone struggling with thoughts of suicide can call the National Suicide Hotline at 1-800-273-8255.