Jones Scores 22 to Lead No. 6 Baylor Over Texas 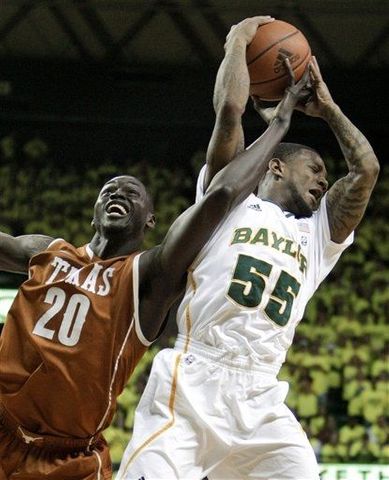 Baylor led by 12 points early in the second half before guard J'Covan Brown led a charge that helped the Longhorns tie the game.

Jackson's 3-pointer gave the Bears a 69-66 lead with 2:36 left, and they hit seven free throws down the stretch to seal the victory.

Brown scored 20 of his 32 points in the second half for Texas but he missed a 3-point attempt with 10 seconds left that would have tied the game.

The Longhorns have lost four of five since starting conference play 2-1. Texas is in the midst of a six-game stretch where they play five ranked opponents. Things don't get any easier for Texas as it hosts No. 2 Missouri on Monday night.

Brown, leading the Big 12 with 19 points per game, was 11 of 22 from the field and broke out of an offensive slump. The junior guard had made only 18 of 70 shots in his last three games.

Jones and Acy hit a pair of free throws to stretch the lead to 73-66 before Texas made one last surge to pull to 74-71. Brown couldn't complete the rally as his 3-point attempt in the final seconds was well off.

Jonathan Holmes scored to give the Longhorns a 19-18 edge with 9:14 left in the first half.

Texas, which came into the game shooting just 40 percent in conference games, missed six of its first seven shots. The Bears capitalized as they went on a 15-5 run over the next 5:29 to take the lead for good.

The spurt was capped by an alley-oop dunk from Jones on a pass from Jackson that gave Baylor a 33-24 lead with 3:45 remaining in the first half.

Missouri will take on Texas in Austin on Monday.