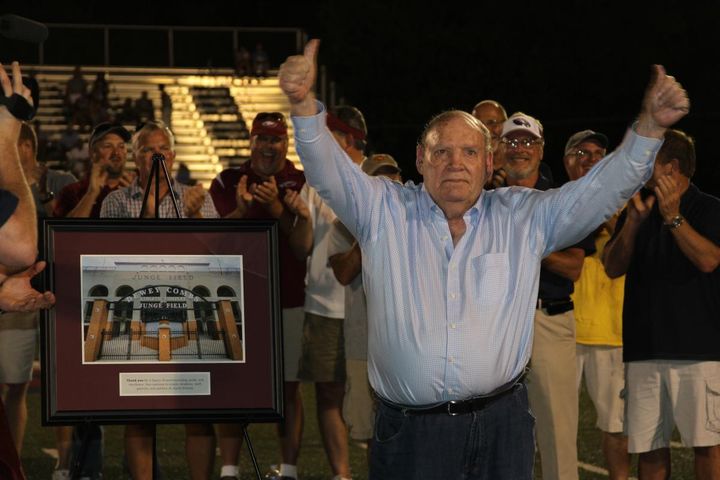 The home of Joplin High School, Junge Field, was renamed the Dewey Combs Athletic Complex at Junge Field. Combs coached in Joplin for 19 years of his 29-year coaching career at Parkwood High School, one of the two schools Joplin split into in 1968.

Combs won more than 200 games in his career and four state championships. But this honor means the most.

"Well it'd have to rank first," Combs said. "It made me feel like it had paid off for the work I'd put in and I'm happy for the players that caused it to happen."

His former players praised the genuis of their old coach, including his influence beyond the high school level.

"Back in 1975, MU (Missouri) coaches said Parkwood runs the wishbone better than OU (Oklahoma) and they had played OU the week before," former Parkwood safety Bill Williams said. "After that fact, apparently the OU coaches got wind of it. They were up in full attendance and coach brought all the players out after the end of the season to run the wishbone so OU could watch it."

"Not only was he a genius on the football field as a coach, but he taught us many things," former Parkwood wide receiver Steven St. Clair said. "He taught us life skills, life skills that I take with me every day. He taught me discipline, hard work, and he gave that to me."

For the players and coach, Junge Field is a staple of the Joplin community.

""It's an icon in society," St. Clair said. "When other teams come into Joplin, they love to come into Junge Stadium."

"I've been in a lot of football stadiums and there's nothing to compare to Junge Stadium," Williams said. "I think 500 years from now, this building will still be standing. It's a symbol of Joplin in my book, it's a special place."

Combs never thought he would see the hallowed field named after him.

"I actually played on this field and the coach named me captain that game," Combs said. "If someone would've told me that someday this would be named after me, I wouldn't have believed them of course."

Another former player, Jeff Flowers, said the stadium means that much more now that it's named after Combs.

"Now that it's named after coach Combs, I want to bring my family here, I want to enjoy games," Flowers said. "My son will playing here, my daughter graduated from here, it means everything."

While Junge Field holds memories and many victories, three years ago, it served a whole other purpose when a deadly tornado swept through Joplin.

"It was kind of a rallying point for the community to come together and watch the boys play football," Flowers said.

"Joplin's a strong community but having icons like Junge Field still here, you can come here and feel healed," St. Clair said.

The citizens of Joplin have made plenty of progress in rebuilding their community. The first open house for the brand new Joplin High School was on Aug. 28. But Combs, and what is now the stadium that bears his name, have served as symbols in stability through trying times.

"I think it's coming back. The areas that were destroyed, my gosh, you can go out where it was flattened out and everything, there's big new modern buildings going up," Combs said. "I'm proud of the way everything has come around after that."