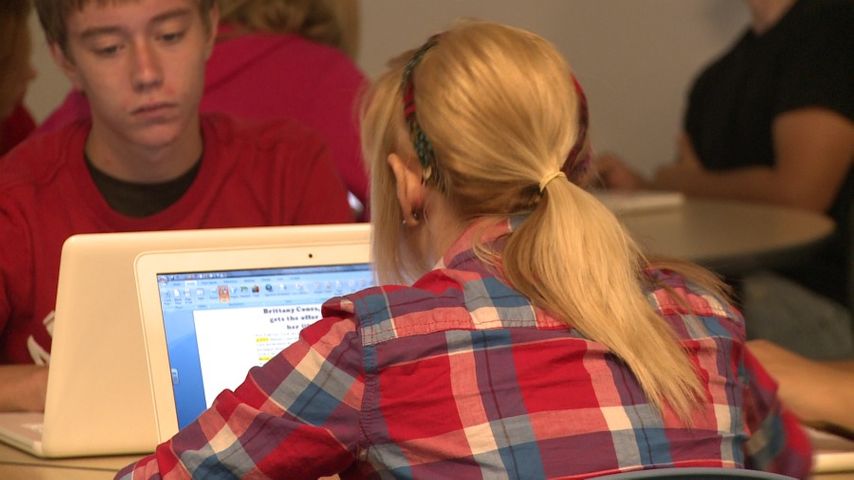 JOPLIN - Students at Joplin High School no longer have to worry about text books or even notebooks and pencils. That's because every student has been issued a personal laptop computer.

The new high school was built right into a vacant portion of the city's Northpark Mall.  Within the building, a state-of-the-art, 21st century high school has been built.  Colton Brandenburg is a senior at Joplin High School and said, "Adjusting to this building has been great because they've been able to provide a lot of equipment and what they've done with it is a lot more than I expected to be done in the short amount of time that they've had."

The school is designed around "learning pods" rather than traditional classrooms.  Open study areas equipped with tables and chairs line the hallways, which are decorated with murals depicting the school's eagle mascot.  Each study area also features a charging station for students' laptops along with monitors which allow students or teachers to hook up their laptops to display their work to groups of students.

Principal Kerry Sachetta said he's proud to be a part of the project, "It's been a humbling experience for all of us involved. People need to realize from outside of Joplin when they come to Joplin and help they've really helped significantly more than what they believe." Since the May 22 tornado, Sachetta has worked with many groups to create the technologically advanced school, finishing it in just more than 80 days. The United Arab Emirates donated half a million dollars to the school, which it used to purchase laptops for every student.

Sachetta said the school is already working with others around the state and nation to bring flexible learning to as many classrooms as possible.  School will be held in the temporary location for at least three years while a new school is being built. Sachetta said his staff members will use this location to perfect their idea of the ideal 21st century high school.