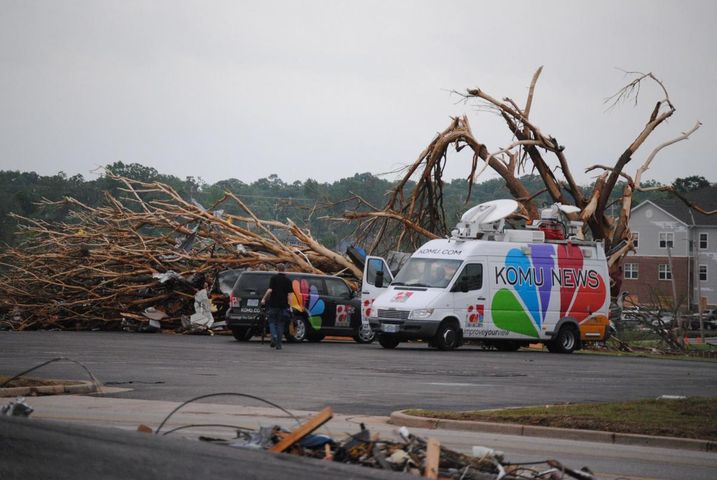 JOPLIN - It's been nearly 2.5 years since the Joplin tornado, and I'm is still trying to keep our viewers informed of the re-building process.

Three new schools will open in Janaury, the new high school should open next August, and the new hospital is still about 1.5 years away.

My trips to Joplin aren't weekly anymore, they're not monthly, but during the past two trips I couldn't help but notice a landmark that's still standing.

This landmark means a lot to KOMU.

It's a tree, an oak tree. It's dead, but it's still standing.

It withstood winds of more than 200 mph.

Knowing my Joplin geography, this shows the tornado appeared moments before hitting the tree.

This is where we set up in the first week after the tornado and several times afterwards for that matter.

During our most recent trip to Joplin I wanted to bring back a few memories.

Our engineering staff found a great backdrop with the hospital and the tree.

You wouldn't know today, but a ten-story hospital was directly behind the tree, and sheer devastation everywhere you looked.

The tree was debarked, the top half was missing, and had an 18-wheeler wrapped around the trunk.

The tree became our gathering spot day and night.

I don't know how they got the 18-wheeler away from the trunk without cutting down the tree.

But they did; the truck is gone, the deep scars remain, the middle section doesn't look horrible, there's sort of a crown at the top.

This fence at the bottom got my attention, will this story about the mighty tree feature a happy ending or not?

It all depends whether Joplin can afford to build a tornado museum or not.

If built, the tree will be cut, sized, and become a permanant fixture in the museum.

I'm pretty sure if that happens, many KOMU pictures and accounts will be on display as a historical reminder of what happened May 22, 2011.