Joplin man living in tent while volunteers rebuild his home 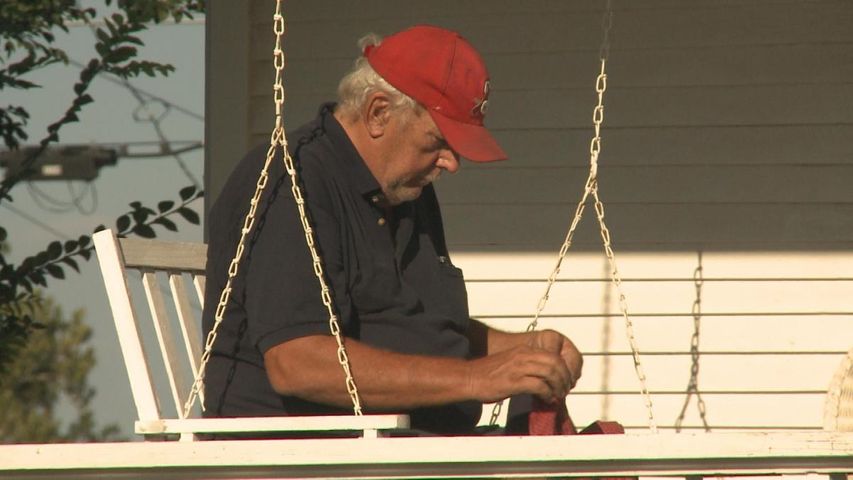 JOPLIN - Three years after a deadly EF-5 tornado touched down in Joplin killing 161 people, people left behind are still trying to recover.

Mark Hensen moved into his home more than thirty years ago. He raised five kids in Joplin and has worked for the local cable company in his neighborhood for years. His job familiarized him with the area and the people in it.

Despite the destruction, Hensen's home more-or-less remained intact. Hensen said a large tree came through the roof and caused the ceiling to cave in, starting a chain reaction of ailments against the aging home.

"I think I had like nine windows completely gone," Hensen said. "I had plastic on them and it was a cold winter, that last one, winter was cold. I didn't know if I could take another winter or not."

Hensen said the plastic over the windows remained for during the three years since the tornado. He said this year he finally decided he couldn't handle another Missouri winter without heat or windows. Three years later, he reached out to non-profit construction organization, Rebuild Joplin.

"I told them I really was attached to my house and really would like to keep it if they could," he said. "They came through and saw what it would take to bring back and try and keep some of the same character to it. They said it had an inate sort of character to it."

Rebuild Joplin works with Joplin residents who are trying to restore their housing following the deadly tornado. The organization formed immediately after the tornado and relies on volunteers from across the country to rebuild the homes destroyed in the storm.

"We can't leave until this is truly finished once every homeowner who was affected is back into similar housing situation until then we really need to stay committed to this thing," Executive Director Thomas Corley said.

Volunteers surveyed Hensen's home and found it needed much more than new windows. Volunteers with Rebuild Joplin will install new floors, ceilings, insulation, windows and much more, all while keeping the integrity and personality of the home. Hensen isn't alone. There are still dozens of homes waiting to be fixed. Corley said Rebuild Joplin currently has nine active sites and the organization hopes to complete an additional 37 projects this year. A drastic drop in volunteers, however, has slowed efforts by the organization. In the meantime, Hensen lives in a tent on his property.

Abenescio Fransua is a site supervisor with Rebuild Joplin and working with Hensen on the construction at his home. Fransua said he's seen a drop in volunteers since he joined the organization.

"The numbers have been dwindling," he said. "Until that last house is done, until that last nail is put down, c'mon, it's our neighbors. Let's go ahead and do it."

In 2012, a year after the tornado, around 10,000 people volunteered with Rebuid Joplin. In 2013, volunteer numbers dropped to 3,500 and this year volunteers have only reached 1,300. Corley estimated if 40-50 volunteers worked on projects through the end of the year, Rebuild Joplin's work would be done. Rebuild Joplin reports only 5 percent of its volunteers are from Missouri. A statistic he said he hopes is changed by reaching out to mid-Missourians who may not realize that there's still work to be done.

Hensen couldn't quite put into words the attachment he feels toward the Jack-and-Jill style home, but he said the nine-foot ceilings and the oversized windows have always been a favorite part. He said without Rebuild Joplin he doesn't know where he would of gone.

"I look at myself and I cannot believe it. I have to look every time I turn around and feel that yes, it's being fixed. There's people that's living like me today and they might not have any idea how to get help and there is people that need help," Hensen said. "It would have been a condemned place if the city had come in," he said. "If they'd looked at the windows and the plumbing, and the electrical and things in general. They would of condemned it and made me move."

To learn more about volunteering with Rebuild Joplin, call 417-625-3543 or e-mail volunteer@rebuildjoplin.org